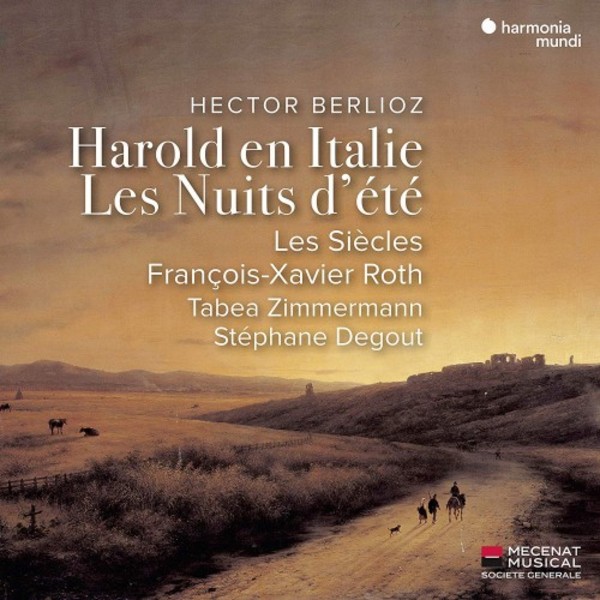 A new aesthetic calls for new forms: such is the challenge the composer Hector Berlioz set for himself in the two works presented here.

In Les Nuits dété, Berlioz pioneered, well before Mahler and Ravel, a song cycle for voice and orchestra.

In Harold in Italy, scored for large orchestra and solo viola, he experimented with the symphonic genre.

These period-instrument performances by Les Siècles, led by François-Xavier Roth with violist Tabea Zimmermann, also feature Stéphane Degout in the vocal cycle, heard here in the composers own version for baritone.

With Debussy Year barely over, its already time for the record companies to start marking 2019s 150th anniversary of the death of Hector Berlioz. How extraordinary to think that barely 50 years separate the deaths of these two great French composers, both so revolutionary in their musical achievements yet inhabiting such different soundworlds. Few groups today are better placed to open up those worlds than François-Xavier Roths period instrument orchestra Les Siècles, and now, following their critically acclaimed accounts of Debussys Jeux and Trois Nocturnes, they treat us to two of Berliozs most characteristic scores, the symphony for obbligato viola and orchestra Harold en Italie and the set of orchestral songs Les Nuits dété. And what a treat it is! Here is historically informed performance at its absolute best, the ranks of French wind instruments in particular immaculately voiced and blended to make this whole disc an absolute joy to listen to.

Originally commissioned by Paganini as a vehicle for his Stradivarius viola, but subsequently turned down by the virtuoso star when he saw how many bars rest there were in the solo part, Harold en Italie is, like Webers Der Freischütz, a quintessential work of musical Romanticism. Its Byronic hero merges with Berliozs own experiences in the mountains of Abruzzo where he sought refuge from the stifling creative atmosphere of the Eternal City during his Prix de Rome sojourn. Oozing with Abruzzian atmosphere as filtered through Berliozs dazzlingly idiosyncratic musical style, it is delivered here with an unfailing grasp of the scores manifold orchestral colours. Roth earned his spurs in this repertoire as assistant to Colin Davis and John Eliot Gardiner, and he adds to that wisdom a native Gallic flair that is impossible to resist.

His viola soloist is Tabea Zimmermann, already well experienced in this score, whose beauty of tone, exquisite phrasing and natural stylishness infuse the passive observer Harold with a particularly sympathetic mien. From the violas first meditative appearance in the long slow introduction, through the mysterious harmonics of the pilgrim march second movement and the toe-tapping saltarello and serenade of the third, to the last aching farewell as all around indulge in a riotous orgy, this is a standout performance even among an exceptionally well served discography. There is no soloistic grandstanding here, but instead complete harmony with Zimmermanns fellow musicians, aided by an ideal balance. As Berlioz (almost) said: Allons donc, viola la vie! And even the listener of long experience will be amazed at the startling blending of colours that Roth brings to the score, from the obvious relishing of the works opening sinuous to textures to the brilliantly placed final chords of the first and last movements.

The coupling is an unusual and unusually rewarding one. Les Nuits dété doesnt normally appear on disc alongside Harold en Italie on disc, nor is it usually heard with a male singer, but here it is extraordinarily effective, a yin to Harolds yang. And with a baritone of Stéphane Degouts musicality and sensitivity to text, Théophile Gautiers verses are as well served as they have ever been. Berlioz himself approved of male voices for these songs, which are heard here transposed down from the usual keys heard on most soprano and mezzo performances, but with no loss of brightness or atmosphere. With superbly stylish support from the scaled down forces of Les Siècles, once again the sheer variety of moods and textures strikes the listener from the outset. The baritone voice lends a special introspection to the more thoughtful second to fifth songs (not least in an utterly heartstopping account of no.4, Absence). The surprise, however, is how well it is suited to the more extrovert emotions of the framing Villanelle and LÎsle inconnue, which here leap off the page and spring vividly to life. There have been male-voice recordings of Les Nuits dété before, but this one knocks spots off them: and if you havent yet experienced any of them, do try this one  it will enrich your view of the work!

As if one glorious Berlioz disc werent enough to launch their celebrations, Harmonia Mundi issue another in the same month. Released in collaboration with the Musée national de la musique, it showcases a fascinating and unusual instrument in the Museums collection: a 1928 Pleyel vis-à-vis (face-to-face) piano in a two-piano arrangement by Jean-François Heisser of the Symphonie fantastique. Essentially comprising two nested miniature grand pianos with a common soundboard and lid, and with the players facing one another, this splendid instrument is put through its paces by Heisser and his duet partner Marie-Josèphe Jude in an arrangement which makes up in textural and contrapuntal clarity for what it inevitably loses in terms of orchestral colour. In the more exuberant passages, and especially in the last two movements, it is heard at its thunderous best, but throughout the performance it reveals aspects of Berliozs most popular score that are rarely heard in orchestral performance. Here, instrument, arrangement and performance are all of the greatest interest, and captured to perfection in Pariss new Philharmonie.

There is likely to be a veritable deluge of Berlioz releases in the next twelve months, but these two new discs from Harmonia Mundi will surely remain among the pick of the bunch for years to come.

This historically accurate performance is truly convincing, adding transparency and emotion to Berlioz ... Les Siècles use woodwind and brass instruments from the middle decades of the 19th century, which, combined with the gut strings, create busy, buoyant textures over which Tabea Zimmermanns solo viola can soar with ease, though there is no lack of tonal weight when the orchestra takes centre stage ... Though Les Nuits dÉté is most commonly heard nowadays with either a soprano or a mezzo singing Théophile Gautiers texts, Roth opts for a baritone, the superbly intelligent, and light-toned Stéphane Degout, whose delivery of these songs is impeccable.  Andrew Clements
The Guardian 24 February 2019