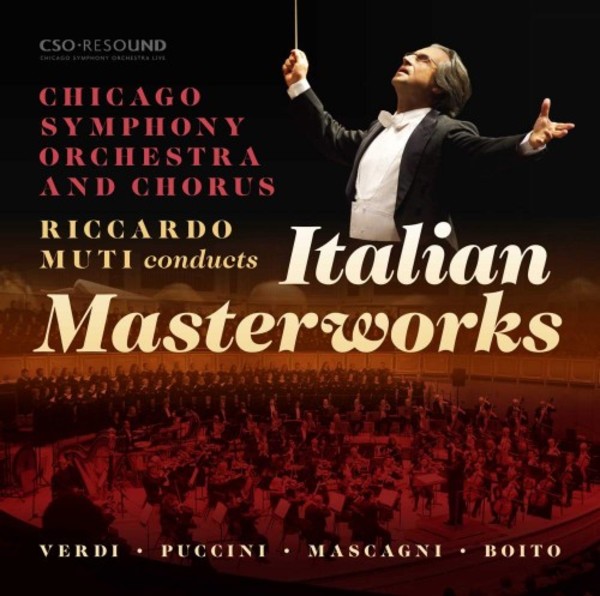 Italian Masterworks, led by Music Director Riccardo Muti, features the Chicago Symphony Orchestra and Chicago Symphony Chorus in works by 19th-century Italian composers Verdi, Puccini, Mascagni and Boito, whose works epitomize one of operas most important periods. The programme was recorded live in Orchestra Hall during the final concerts of the CSOs 2016-17 season. On the recording, the Chicago Symphony Chorus, prepared by Duain Wolfe, is heard in choruses from Verdis Nabucco and Macbeth, as well as in Boitos Prologue to Mefistofele, along with acclaimed Italian bass Riccardo Zanellato as soloist and the Chicago Childrens Choir, prepared by Josephine Lee.

Italian Masterworks, Mutis ninth recording on CSO Resound, features multiple works by Verdi, including the overture and the opening chorus Gli arredi festivi from Nabucco, followed by the chorus Patria oppressa from Macbeth and the overture to I vespri siciliani.

The remaining works on this release point to Verdis musical influence on other important Italian opera composers of the era and include Puccinis intermezzo from Manon Lescaut, Mascagnis intermezzo from Cavalleria rusticana, and Boitos Prologue to Mefistofele. The concluding work by Arrigo Boito, better known as Verdis librettist for the composers final operas Otello and Falstaff, represents an important musical achievement. Its grand drama unfolds in one extended episode that opens with a chorus of angels, followed by the devil Mefistofele addressing God defiantly about his quest to win the soul of Faust. A combined chorus sings a song of praise to conclude the work.