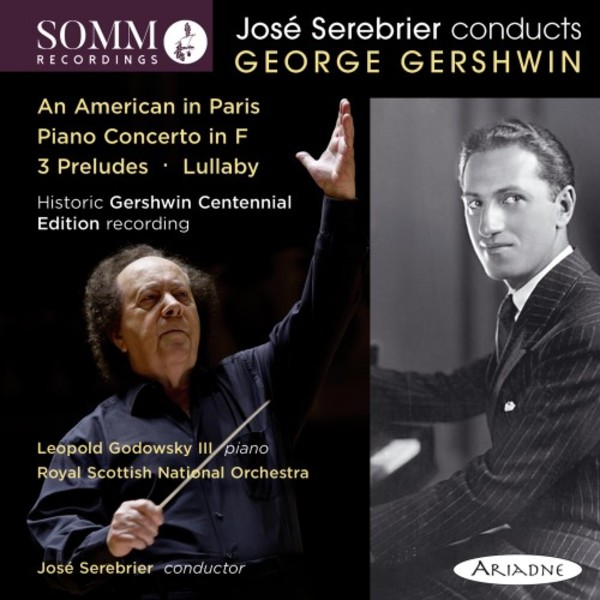 Somm Recordings closes the 120th anniversary year of George Gershwins birth with the re-issue of the historic 1998 Centennial Edition recording initiated by the composers sister, Frances Gershwin, together with first appearances on disc of two orchestrations commissioned from José Serebrier.

The recording followed a concert in London (the capitals only official celebration in the centenary year of Gershwins birth) organised by the composers formidable sister, Frances  96 at the time  who invited Serebrier to conduct An American in Paris, the Concerto in F (with Godowsky as soloist), and, in specially commissioned orchestrations by Serebrier, the Three Preludes and Lullaby  both of which are issued on disc for the first time here. The programme shows Gershwin at his inimitable, era-defining best. Composed as an extended ballet sequence for the 1951 MGM musical starring Gene Kelly, An American in Paris is a buoyant, Technicolor-bright tribute to the French capital shot through with jazz-accented vitality.

The Concerto in F is a bold, brassy, brilliantly orchestrated work with a grandstanding piano line bridging the worlds of classical music and jazz. Its animated opening movement is followed by a Blues-tinged Adagio and a finale boasting a helter-skelter orgy of rhythm and athletic pianism.
Initially reluctant to orchestrate Lullaby, Serebrier says: Now I am glad Leopold persuaded me. I have tried to keep the scoring as simple and pure as possible, so that the orchestral version of this poignantly lovely piece might take on a life of its own in a voice that is still recognizably Gershwins.
Orchestrating the Three Preludes, he recalls, was great fun  a feeling thrillingly in evidence on the surface of the vigorous and dancelike first and third preludes framing a blues lullaby that is altogether more gentle and intimate.

The never before re-issued recording  produced by the legendary Paul Myers  is a brilliant reminder of one of the most remarkable talents of the 20th century in performances by one of his greatest interpreters.