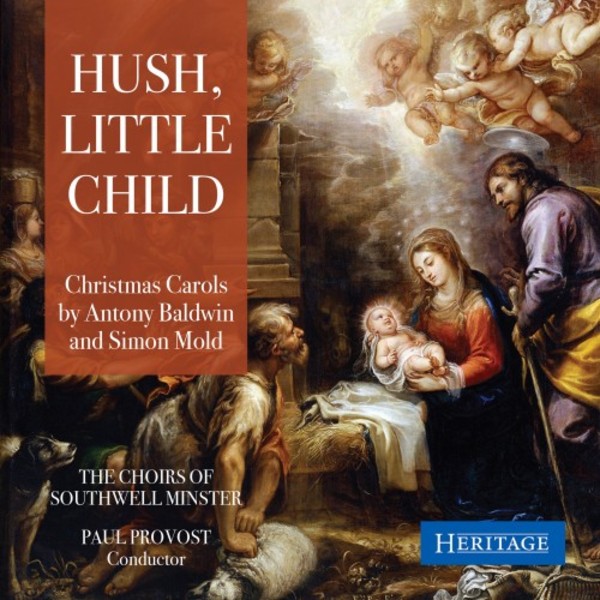 Chorale Prelude on 'Lo, how a Rose e'er blooming'
Dormi Jesu
Mr Theo Saunders, His Trumpet Tune
There is no Rose

The Choirs of Southwell Minster

Chorale Prelude on 'Lo, how a Rose e'er blooming'
Dormi Jesu
Mr Theo Saunders, His Trumpet Tune
There is no Rose

The Choirs of Southwell Minster

Antony Baldwin was born in London. His early years were spent as a chorister at Southwark Cathedral. From a young age he gathered various diplomas and prizes for performance, choir training and composition. He studied at the Universities of Oxford and Durham, and afterwards embarked upon a career in teaching, organ-playing and choir-training. For 27 years, he was Director of Music at the American Church in London. Until 2016, he made regular visits to the United States as a recitalist and formed his own chamber choir in California, which operated until 2010.

Simon Mold was born in Buxton in 1957, and following success as a treble soloist in the North West became a chorister at Peterborough Cathedral under the legendary Dr Stanley Vann. After reading English Language and Medieval Literature at Durham University, where he was a Cathedral Choral Scholar, Simon embarked upon a teaching career principally in the south of England and sang in several cathedral choirs. Upon retirement from teaching he joined Leicester Cathedral Choir just in time to take part in the memorable Richard III Reinterment ceremonies. His interest in composition began at Peterborough where he directed a performance of one of his own choral pieces in the cathedral whilst still a boy chorister. Subsequently Simons music has been widely published, performed, recorded and broadcast: for instance, his anthem Come, praise the saints, for choir, organ and 3 trumpets was conducted by John Scott in St Pauls Cathedral, London, and his well-known Candlelight Carol, included on this CD, featured in Lesley Garretts television series Christmas Voices. More recently his cantata Passiontide, commissioned by Lionel Marchant, was performed and recorded by Newport Cathedral Choir under Christopher Barton. Simon has also been a regular contributor to various musical and literary magazines, and has written widely on diverse aspects of music, language and literature.

The Voice of Isobel Baillie