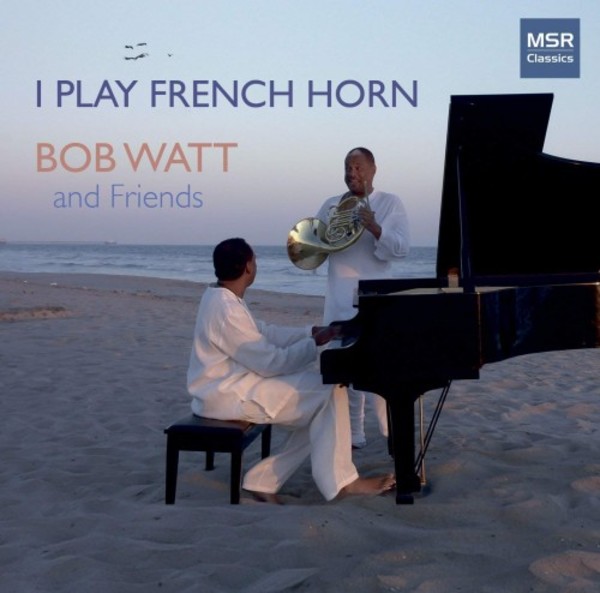 Throughout this stellar album by Bob Watt, who was the Assistant Principal French Horn of the Los Angeles Philharmonic from 1970 to 2008, a wondrous musical space is created that Watt inhabits spiritually with striking power and finesse. I found myself imperceptibly drawn into this realm by the deep, sometimes dark, luster of his music. There are occasional quotes to orient the listener in musical time and space, or to pay respects to other great musicians, but there is never a hint of imitation. The spiritual journey that this album beckons the listener to embark on reaches far. At times the music soars; at others it is alternately haunting, angry, humorous, prayerful and caressing. Its messages are in the feelings it engenders. Each of the selections in this collection provides an artistically satisfying experience while together rendering a coherent musical mosaic.  Paul Robeson Jr.

Robert Lee Bob Watt is the first African American French Horn player hired by a major symphony orchestra in these United States. In 1970, he was offered the position of Assistant Principal French Horn in the Los Angeles Philharmonic by conductor and Music Director, Zubin Mehta. Watt performed frequently as a soloist during his tenure in the Philharmonic, with the orchestra and as a guest performer with other ensembles. Never idle, he also became an active presence in Los Angeles recording studios and as a freelance musician, performing in numerous major film scores, and in television and pop music recordings. He continued in the Los Angeles Philharmonic for 37 years, subsequently retiring in 2008. Says Bob:

My love of life and music has driven me from a very young age to cultivate both to the highest level possible. I fell in love with music before high school, and realized early on that the direction in which music was transforming my life meant that the two would be forever intertwined. Therefore, whatever I demanded of my music, I had to equally demand of life itself. The selections on this album are a modest testament to the labyrinthine journey that my life has taken since I chose music as my path.

As a symphony orchestra French horn player, I have performed in a wide range of large orchestral works, encompassing the entire spectrum of musical periods, as well as in television, motion picture scores, pop, R&B recordings and contemporary jazz. This varied exposure to the multitudes of musical styles and flavors has enriched both my life and my musical path.

While the French horn traditionally points towards the classical music world, I have been able to maintain and differentiate between the music that exists for my particular instrument and music that hails from my personal ancestral background  The Gullah culture of the southern United States. As a descendent of this group of Africans whose traditions led to the formation of what we know as Gullah culture, I was compelled to seek out the Work Song which, for me, embodies aspects of the experience in musical expression. Hence the Gullah Novella on this album was a sweet discovery along with the jazz standard Blue Rondo à la Turk and a few other departures from the purely classical vein.

Upon completing the recording, I shared it with my friend, writer and cultural historian, Paul Robeson Jr.  son of the great baritone and actor Paul Robeson. His words so graciously encapsulated much of what I was feeling in my musical intention, that it is now attached to the art and performances of I Play French Horn.

But Not Forgotten: Music by African-American Composers for Clarinet & Piano