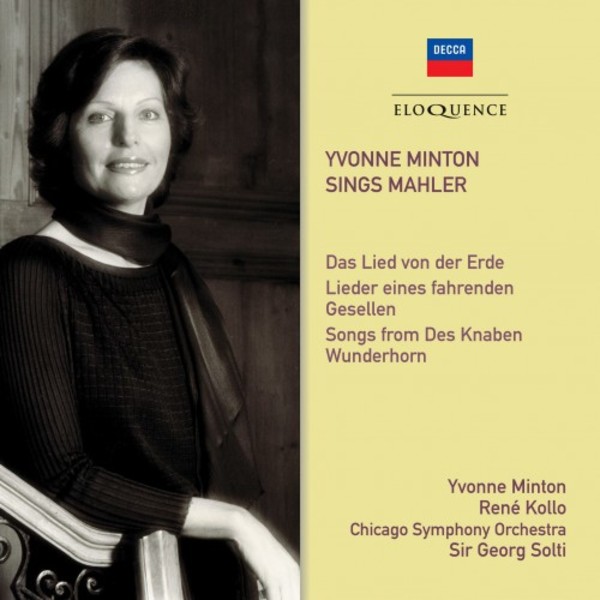 » no.2 Verlor'ne Muh'
» no.5 Das irdische Leben
» no.7 Rheinlegendchen
» no.9 Wo die schonen Trompeten blasen
Lieder eines fahrenden Gesellen (Songs of a Wayfarer)

» no.2 Verlor'ne Muh'
» no.5 Das irdische Leben
» no.7 Rheinlegendchen
» no.9 Wo die schonen Trompeten blasen
Lieder eines fahrenden Gesellen (Songs of a Wayfarer)

Minton-Solti-Mahler: the complete record of a supreme artistic partnership. For a memoir published in 2017, Yvonne Minton wrote that Mahlers music could have been written with Sir Georg and the Chicago Symphony Orchestra in mind. She was too modest to speak of her own contribution, in which a superbly schooled technique is allied to a deep feeling for the music at hand.

Released as a filler on Side D for Mahlers Fifth Symphony, the very first recording made by the CSO/Solti team that would become a byword for orchestral brilliance over the course of more than four decades, this 1970 account of four songs from Des Knaben Wunderhorn perfectly illustrates Mintons claim for Mahler as a master storyteller. She recalled of these early sessions together that the rapport between Sir Georg and the orchestra was immediately apparent ... and the delicacy of touch was a wonder to behold. In the same sessions were taped Lieder eines fahrenden Gesellen, which were duly issued as a filler for Mahlers Sixth in 1971.

That year Minton joined a galaxy of soloists and the CSO in Vienna to take her part in the now-legendary recording of the Eighth, but the true seal was set on the Decca-Mahler-Solti-Minton partnership in May 1972, with Das Lied von der Erde and its sublime embodiment of valediction in Der Abschied. Though he always had a genius for accompanying singers, this finds Solti at his most sympathetic as a conductor, allowing Minton all the space required to plant each step along the journey of growing solitude with the simplicity which she herself prized in Mahlers music. Minton learnt the cycle from listening to the celebrated account made by Kathleen Ferrier and Bruno Walter in Vienna, and this recording is a worthy successor.

Minton makes a splendid soloist in these colourful songs.  The Penguin Guide to Records (Songs from Des Knaben Wunderhorn)

These beautiful, intense accounts of some of Mahlers most attractive songs are well worth issuing separately ... Yvonne Minton has a superbly Mahlerian intensity and a quick understanding of the emotional centre of gravity in the more passionate or sombre songs. She consorts particularly well with Solti.  Gramophone, October 1974 (Des Knaben Wunderhorn, Lieder eines fahrenden Gesellen)