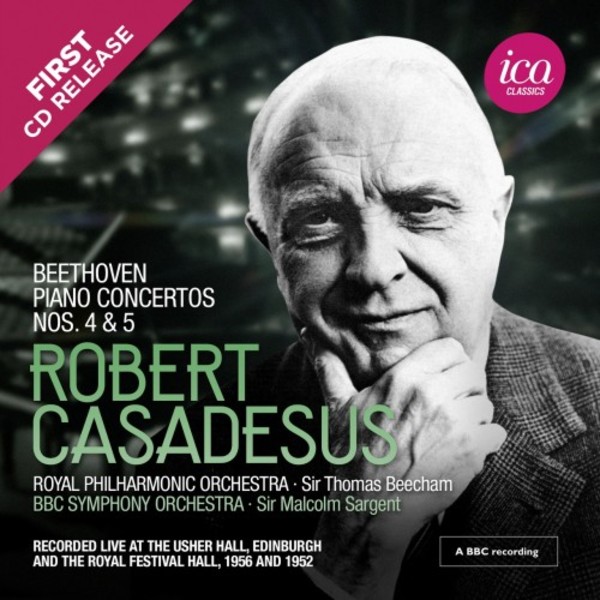 This release has been sourced from the Richard Itter archive of live recordings. The collection is very important for collectors because it has never been released before onto the market. Following the archives launch in October 2017 with releases featuring Beecham, Böhm, Cantelli, Karajan, du Pré, Klemperer and Rostropovich, it has received universal praise from both the classical media and record collectors for the excellent sound and performances.

Robert Casadesus (1899-1972) was a renowned 20th-century French pianist and composer who knew and worked with Ravel. He was especially known for his celebrated performances of the Mozart Concertos accompanied on record by George Szell  the Gramophone called it exquisite Mozart playing, as well as his recordings of Ravel, Fauré and Debussy. He recorded Beethovens First, Fourth and Fifth Concertos, the latter two multiple times, though these were all made in the studio. He also extensively recorded the Beethoven Violin Sonatas with Zino Francescatti, who also appears in ICA Classics Pierre Monteux set.

In The Art of the Piano, David Dubal wrote of Casadesus: He became the absolute French pianist, his countrys finest. Casadesus embodied the qualities of Gallic balance, unforced sound, style, and precision of technique. His sound was crisp, dry, and sparkling, like a vintage champagne. Casadesus was a sophisticated musician, whose pianism was phenomenally supple. His range was wide and his use of the pedals was simply astonishing.

The critic of the Times wrote of the performance of the Emperor Concerto: He allowed the work its nobility but pruned its magniloquence by eschewing dynamic emphasis and rubato. He sought most for clarity and his passagework in the top octaves of the piano was delicious. In the finale he substituted an affectionate humour for the unbuttoned treatment it usually gets from German interpreters.

Both the Beethoven Concerto No.4 with Beecham from 1956 and the Emperor Concerto with Sargent from 1952, have never been issued before and are rare additions to the Casadesus discography.