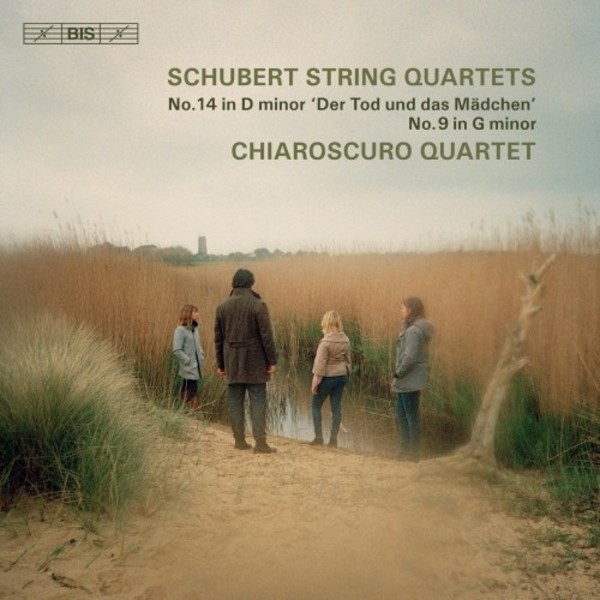 One of the truly iconic works in the repertoire for string quartet, Franz Schuberts Death and the Maiden is named after the song which has lent its theme to the second movement. At the end of Matthias Claudiuss poem, which Schubert had set as a 20-year-old in 1817, Death cradles the Maiden in his bony embrace. And her fear, in the first verse, of encountering his tomb-cold touch, is mirrored by his desire for her in the second. In Schuberts lifetime, death was a constant presence in everyday life and even a young person like himself would have encountered it at close quarters  in fact, his own mother had passed away when he was only 15.

When Schubert returns to the song in 1824 and starts work on the string quartet, death has nevertheless grown even more real: in the meantime he has become acquainted with pain and disease during the bouts of the syphilis that he knows will kill him. He turns the song into a set of variations, preceding it with a ferocious Allegro, and following it with a Scherzo and a Finale that have been described as the dance of the demon fiddler and a dance with death. The acclaimed Chiaroscuro Quartet performs the work on gut strings, which brings out the vulnerability and desperation even further. The players then let us down gently with the youthful String Quartet no.9 in G minor, a work in which the minor key offers Schubert the opportunity to play with light and shadows, rather than full-scale drama.

Brilliantly led by star violinist Alina Ibragimova, the Chiaroscuro Quartet has recently attracted widespread acclaim for their ear-opening accounts of Haydns groundbreaking Op.20 string quartets. Now the group, known for its combination of period instrument stylishness with maturity of musical insight, raises its game still further with a return to the music of Franz Schubert, which it first explored on disc seven years ago (the Rosamunde Quartet on AP022, currently unavailable). They couple his G minor Quartet, D173, composed in 1815 when Schubert was still in his late teens, with one of the composers undisputed masterpieces, the D minor Death and the Maiden Quartet, D810 (1824).

By opening with the later work, they immediately grab the listeners undivided attention. This is a simply stunning performance, as remarkable for its expressive power as it is for its textural clarity. As well as mastery of period niceties (vibrato is restrained but by no means absent, and deployed with immense thoughtfulness), the group is obviously completely attuned to the Schubertian idiom  that elusive but unmistakable combination of Biedermeier charm, bittersweet Schubertian lyricism, and the visceral emotional engagement of early Romanticism that no other composer comes close to. The first movements opening is boldly incisive without exceeding the bounds of stylistic propriety, and its rhythmic energy infects the movement as a whole. Even in the traditionally more relaxed passages, the Chiaroscuro players combine lyricism with buoyancy and an extraordinary capacity to reveal detail. Yet it never never seems relentless, thanks partly to Ibragimovas sweetness of tone, but also to the remarkable teamwork of the whole ensemble.

Few if any other groups have revealed such a range of colours in the Death and the Maiden second movement, here taken as a proper Andante con moto just as Schubert asks. Dynamic gradations are minutely observed, with an unerring feel for balance, so that theres variety not just between the successive variations but within them. From the deathly pallor of the main theme, through the first violins ethereal musings and the cellos soul-searching, to the ferocious energy of the third variation and beyond, this is an emotional rollercoaster of a performance that fair takes the breath away.

Throughout the Scherzo theres a feeling of grappling with inexorable fate which the delicate tones of the Trio (wonderfully shaped here) only briefly dispel, before the listener is plunged into what is surely one of the most bracing accounts of the final Presto ever committed to disc. Here, as throughout, the Chiaroscuro Quartet give their all and discover seldom noticed colours in Schuberts masterly writing. Even in the concluding Prestissimo coda, taken at one hell of a lick, the players never lose control, pushing themselves and their instruments to the limits but not beyond. This is playing of real distinction, combining stylishness and thrilling musicianship in measures rarely encountered. Long after the performance has ended, the listener is persuaded of its utter rightness, both in its interpretative broad sweep but also in the dazzling detail it uncovers. There have been many fine recordings of this masterwork over the years, but this ranks with the very finest, and has quickly become our favourite.

As for the coupling, the G minor Quartet may lack the sheer heft and genius of D810, but in these players hands it is enormously compelling, a distinctively Schubertian take on the Sturm und Drang world of Haydn and Mozart. The young composer may still have been finding his way here, but it was a way already paved by the first generation of Classical masters, and one of which he was well aware from his experience playing in a quartet en famille. Indeed, the second movement of D173  an absolute gem of an Andantino  is played here with all the loving care and insight one might usually lavish on Mozart, while the Minuet with its theme in octaves and the Allegro finale have all the energy of mature Haydn, raising this filler to unexpected heights. If all the early Schubert quartets were played to this standard, they could well win more widespread admiration.

It should be clear by now that no lover of chamber music can afford to be without this disc. Superbly engineered by BIS in surround sound as well as vitally absorbing stereo, its an outstanding addition not only to the Chiaroscuro Quartets steadily expanding discography but to the catalogue as a whole.

Immer zu! Ohne Rast und Ruh  Ever onwards, without respite: these words from Schuberts turbulent Goethe setting Rastlose Liebe could stand as a motto to the Chiaroscuros Death and the Maiden. This is not to imply any rigidity in their playing. But with their period sound world (gut strings, Classical bows, sharp articulation) allied to hungry tempos and phrasing that vaults across the bar line, Schuberts darkest quartet seems more than ever a study in the inexorable power of rhythm. ... A chasm separates the Death and the Maiden from the 18-year-old Schuberts G minor Quartet, offered here as a digestif. ... Yet in a performance as bracingly immediate as this, the work has plenty of enjoyably Schubertian touches, whether in the Andantes airy dance or the paprika-flavoured finale, duly relished here.  Richard Wigmore
Gramophone November 2018