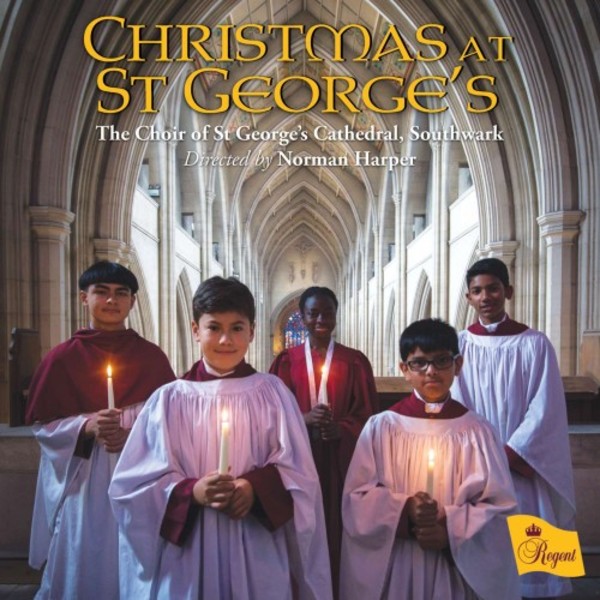 We are pleased to welcome the excellent Choir of St Georges Roman Catholic Cathedral in Southwark in their first recording on the Regent label. The recording is directed by Norman Harper  who retires from the Cathedral at Christmas 2018  and is colourfully accompanied by the Cathedrals organist, Frederick Stocken.

An unusual selection of choral music for Christmas, framed by four of the great Christmas hymns, and six Gregorian antiphons for the two main Masses of the nativity celebration  Christmas Midnight Mass and the Mass for Christmas Day.

The recording features first recordings of new carols and arrangements by Francis Duffy, Timothy Craig Harrison, Christian Strover, and Norman Harper, together with a rare recording of James MacMillans motet In splendoribus sanctorum with its virtuoso trumpet interludes, brilliantly played by Simon Desbruslais.

Gregorian chant is the traditional sung prayer of the Roman Catholic Church, and at St Georges Cathedral it forms a fundamental part of Sunday Solemn Mass and the great celebrations of the churchs year. Here we have included the Introit, Offertory and Communion antiphons for the Masses at Christmas Midnight and on Christmas Day.

The musical tradition which currently thrives at St Georges dates from 2000, when Nick Gale was appointed Director of Music. He built up a choral tradition based on a group of professional lay clerks and boys from various catholic schools within the Diocese of Southwark, and also north of the Thames. Provision was made for choral scholars, boys whose voices were changing and who would learn to sing alto, tenor or bass alongside the lay clerks. With these forces Solemn Mass was established as the main weekly choral service, with Gregorian Chant and polyphony at its heart, and with all Mass settings and motets sung in Latin, by a wide range of composers.

The Girls Choir was founded shortly afterwards, recruited from a wide variety of London schools, initially singing their own repertoire. Over the years the Boys and Girls Choirs have developed to the point where they exchange rôles, and sing together for special services, thus enjoying equal status within the Cathedrals musical life.

The Art of Dancing: 21st-century Concertos for Trumpet, Piano and Strings