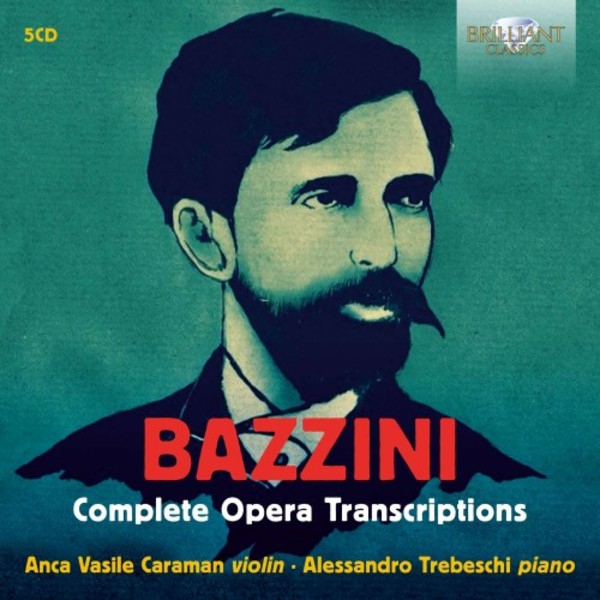 Unrivalled on disc: the first-ever complete set of Romantic-era transcriptions made by the most dazzling virtuoso of his day.

In the generation after Paganini, Antonio Bazzini (1818-1897) sustained a peerless reputation for flying fingerwork and astonishing feats of legerdemain on the violin. As both a virtuoso violinist and composer, he was a product of his time and place, working in a musical culture dominated by opera. His Dance of the Goblins has long been a mainstay of the recital repertoire for violinists seeking to send their audiences on their way with gasps of astonishment, but his transcriptions are much more developed and extensive pieces. They rework not only some of the defining passages of 19th-century Italian opera, but many themes and arias that are now less familiar.

Bazzini found in the operas of Bellini a particularly fruitful source of inspiration, writing no fewer than three separate fantasias on themes from La sonnambula through the course of his career, as well as pieces based on Norma, I puritani, La straniera, Beatrice di Tenda, Il pirata and (when he was just 16 years old) I Capuleti e i Montecchi: an astonishingly vivid and precocious piece of work, handled here with sovereign mastery by the young Romanian violinist Anca Vasile Caraman.

Accompanied here by the Mantovan-born pianist Alessandro Trebeschi, Caraman is equally impressive in Bazzinis extended, improvisatory reworkings of climactic moments in Lucia di Lammermoor and Anna Bolena by Donizetti. Having taken a cold attitude towards the young Verdi, Bazzini was later won over by the genius of La traviata, which resulted in a truly concerto-like fantasia as well as no less technically demanding fantasias on Attila and I masnadieri. In these works, as in the three fantasies on themes from Pacinis Saffo, Bazzini emulates Franz Liszt in venturing far beyond literal fidelity to the notes, towards an expressive fidelity to the original dramas.