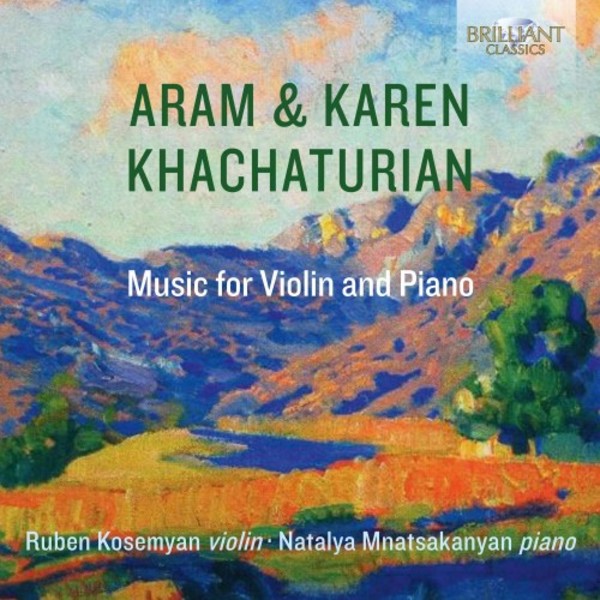 A unique coupling on record of vibrant and impassioned chamber music by the uncleand-nephew Armenian composers.

This delightful disc reminds us of the vital role played by the folk tradition in Armenian classical music, as well as the unrivalled success of both Khachaturians in assimilating that tradition within the Western-European classical idiom. Jascha Heifetzs transcriptions of two numbers from the ballet Gayaneh were once ubiquitous, and David Oistrakh was the first champion of both Aram Khachaturians Violin Concerto, and Karen Khachaturians Violin Sonata.

The Armenian-born Ruben Kosemyan follows in these distinguished footsteps with an urgent, lyrical strain of expression that has won him much acclaim both in Europe and in Canada where he now resides. In 2007 he was awarded a UNESCO gold medal by the Composers Union of Armenia on the occasion of the centenary of Aram Khachaturians birth, and in 2009 he became leader of the Khachaturian State Quartet.

Kosemyan is thus a uniquely well-qualified modern exponent of this music on record. As Karens Op.1, the Violin Sonata of 1947 is a remarkably assured work, cast in a Romantic vein with a soulful slow movement and a dance-like finale full of potent rhythmic drive. His father wrote no violin sonata, but Kosemyan complements the famous Sabre Dance and Ayeshas Dance with his own transcription of a Song Poem, and a version of the voluptuous Adagio from Spartacus made by Henrik Smbatyan. To conclude the album, Kosemyan plays the rapturous slow movement from the Violin Concerto: I wrote the music as though on a wave of happiness, Khachaturian recalled. My whole being was in a state of joy, for I was awaiting the birth of my son. And this feeling, this love of life, was transmitted to the music.