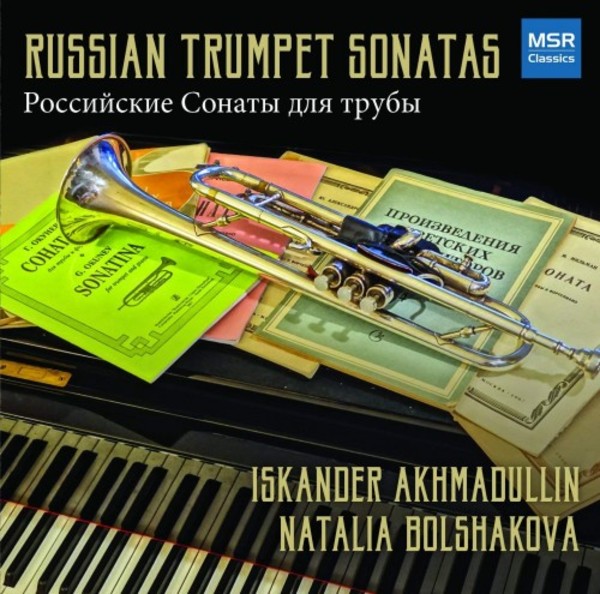 Sonatina in the Russian Style for trumpet and piano

Sonatina in the Russian Style for trumpet and piano

During the first half of the last century, Russian composers have been actively writing for solo trumpet, with concertos and brilliant character pieces being especially popular. The genre of sonata for trumpet and piano remained neglected for a long time. In fact, there seem to have been only three trumpet sonatas composed in Russia before the 1960s: sonatas by Boris Asafiev (1939) and Evgeni Golubev (1956), and a Sonatina by Yuri Chichkov (1953). This situation changed, in part, due to the efforts of Moscow Conservatory trumpet professor Georgi Antonovich Orvid (1904-1980). Orvid resumed his solo performance career in 1961 after almost two decades of absence from the concert stage. As a serious chamber musician, he popularized the trumpet sonata genre in Russia by playing the works of Western composers, such as Hindemith, Hubeau and Kennan. More importantly, in the longer term, he also commissioned a number of sonatas for his own use in performance. For these, he often collaborated with composers of the older generation  like Platonov, Aleksandrov and Milman  while also promoting the compositions of the younger authors, including Agafonnikov, Lyubovsky and Banschikov. This album presents an overview of selected Soviet-Russian sonatas for trumpet, four of which, those by Platonov, Milman, Aleksandrov and Lyubovsky, were written in collaboration with Georgi Orvid.

Dr. Iskander Akhmadullin, Associate Professor of Trumpet at the University of Missouri, has performed in orchestras in Russia and in the United States and can be heard on the Marco Polo, Naxos, Hugo, Klavier, and Delos labels. He is currently co-principal trumpet of the Missouri Symphony Orchestra. As a soloist and chamber musician, Akhmadullin has performed in the United States, Russia, France, Germany, Austria, Armenia, Japan, Australia and Mexico. Active as both a recitalist and a chamber musician, he has premiered a number of solo and chamber works and is continuously introducing new works for trumpet by American composers to Russian audiences, while also presenting the American premieres of works from the Russian trumpet repertoire. Akhmadullin has been a faculty member of the National Trumpet Competition, Midwest Trumpet Festival and Rafael Méndez International Brass Festival in Mexico. He has performed at the International Trumpet Guild conferences, Missouri and Texas Music Educators Association conventions, and with the American Bandmasters Association, College Band Directors National Association and World Association for Symphonic Bands and Ensembles. In Russia, where he was among the first trumpet players there to perform on the baroque trumpet, Akhmadullin has performed at the Moscow Autumn Festival and Russian Trumpet Guild conferences. Previously, he was on the faculty of Southeastern Oklahoma State University and taught at the University of North Texas and Moscow Conservatory. Dr. Akhmadullin holds degrees from the Kazan Music College, Moscow State Conservatory and the University of North Texas where he studied with Abbas Slashkin, Vadim Novikov, Leonard Candelaria and Keith Johnson. He is the first brass player from Eastern Europe to earn a doctorate degree from a major American university. Iskander Akhmadullin is an Artist-Clinician for Edwards Trumpets.

Prize-winning pianist Natalia Bolshakova enjoys an active performing career and has been praised for her beautiful and electrifying playing, astonishing versatility and artistry. She has appeared as a recitalist, chamber musician and soloist with orchestras in France, England, Germany, Czech Republic, Bulgaria, Spain, Russia, and across the United States. Her wide repertoire encompasses works from baroque era to the newest music composed for her. Bolshakova has been a laureate and a winner in many competitions, including the New Orleans International Piano Competition, the Ima Hogg Young Artist International Competition and Vysočina International Piano Competition. As a recording artist, she collaborated with trumpeter John Holt on several albums, two of which were named best new recordings from North America by Gramophone magazine in 2005. Dr. Bolshakova, who has been on the faculty of the School of Music at the University of Missouri since 2004, studied at the Moscow Ippolitov-Ivanov College, Moscow State Conservatory and the University of North Texas.