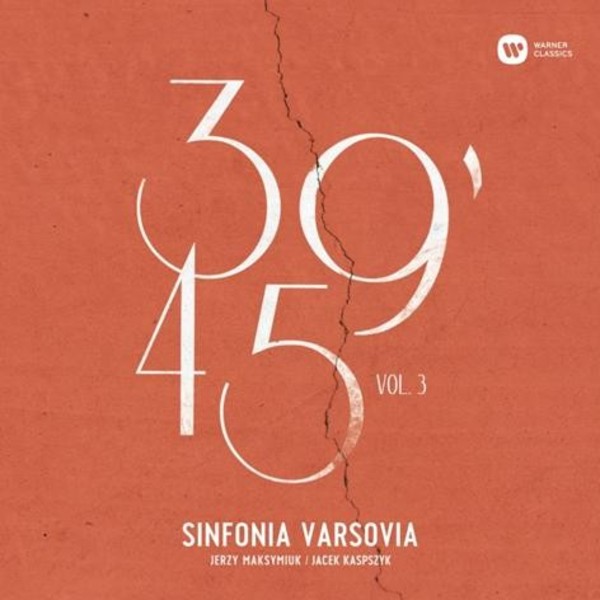 Had it been released at the time the repertoire was created, this record would have been forbidden. This new Sinfonia Varsovia album is the third and last volume of the series 3945, presenting works created in times of war, occupation, and  on this album  also Stalinism, ZSRR and PRL. Incredible soloists were chosen for this project: Marcel Markowski (cello), Maciej Grzybowski (piano), and outstanding conductors Jerzy Maksymiuk and Jacek Kaspszyk. Their interpretation is deeply moving, and the awareness of the historical context of Weinberg, Panufnik and Andrzej Czajkowskis music presented is clearly perceptible throughout.

Mieczysław Weinbergs Cello Concerto (1948) seems to reflect the tragic experience of the young composer forever separated from his family only a few months after graduating from the Warsaw Conservatory. This is evident in the very first phrase of the concerto  the cellos beautiful entry, which is almost like a lonely song developing into a somber lament against an ostinato of the strings in the background. There is a mood of reverie and sorrow throughout the piece, highlighted by memories of a happy past appearing in the following parts as transitory references to traditional Jewish music. Soloist Marcel Markowski deserves special attention. He is one of the most promising young Polish cellists and  Sinfonia Varsovias cello sections concertmaster. His charismatic interpretation captures your attention from the very first note.

In its original 1957 version, Andrzej Panufniks Sinfonia Elegiaca included a choral part and was called A Symphony of Peace. It was dedicated to the victims of World War II. Panufnik described the work in the following words: In its new version, the Symphony was to be an uninterrupted whole consisting of three symmetrically laid-out parts, like an extended triptych. It was deprived of any literary programme and only alluded to contrasts brought by war. The middle part (Molto allegro) was to be a dramatic protest against the deprivation of humanity, the madness, rapes and bloodlust. The outermost parts (both Molto andante) represented mourning for those who died and those who were orphaned. The sadness was intensified by the fact that their deaths and sacrifice did not bestow peace upon the world and did not bring complete freedom to  countries such as Poland, my homeland. The composer also revealed that the Symphony is a protest against violence and aggression manifested in human actions, and a thought of victims of all wars, no matter their nationality, religion and class. He emphasized that he was tormented by the memories of Warsaw under occupation while working on the first version of this piece, by the recollection of terror, death and oppression, the loss of his family and close friends.

André Czajkowski, the composer of the Piano Concerto (1966-1971), was born in Warsaw as Robert Andrzej Krauthammer. He was only three when the war started. His mother Felicja, an amateur pianist, taught him to play the piano before he was taken to the ghetto with his family. In 1942, he was smuggled out by his grandmother Celina and it was thanks to her efforts he survived the war. She paid for hiding her grandson in various homes and it was she who obtained false documents for Andrzej Czajkowski  the name he used until his death. His mother decided to stay in the ghetto and she was murdered in Treblinka several months later at the age of 27. His father Karl survived the war in France. The future composer and pianist lived through an unimaginable trauma, having to hide for hours in the claustrophobic space of a wardrobe. He also experienced cruelty by those who took care of him. He later recalled: How long have I stayed in that wardrobe? Seven weeks? Two years? I was going to count the days but I forgot. Either way, there were no days, no hours in that wardrobe. It was always total darkness. The solo part of Czajowskis Piano Concerto is performed by the exquisite pianist Maciej Grzybowski who is known for fresh and alluring interpretations of modern music.