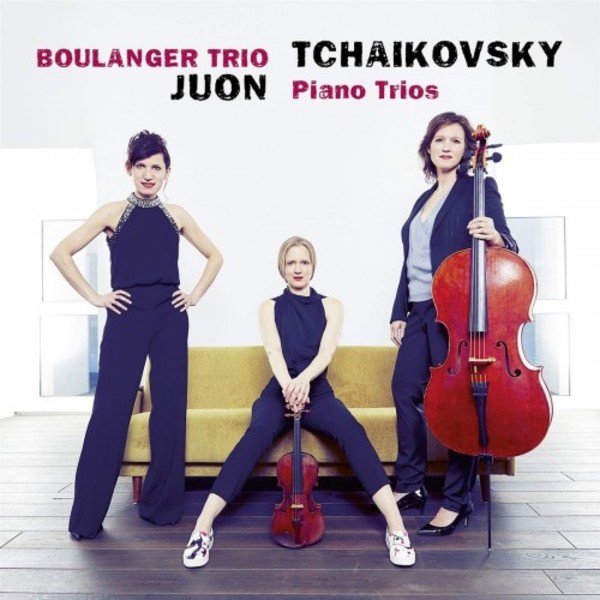 The Boulanger Trio is recognised as one of the leading piano trios in Europe. On their new album, the Trio tackle Tchaikovskys Trio for Violin, Cello and Piano in A minor, op.50 and Paul Juons Litanie, Tone Poem for Piano, Violin and Cello, op.70.

In Juons piano trio, as the members of the Boulanger Trio find, we plunge into the most profound recesses of the soul. Everything acquires existential significance. This work truly captivates us: so much occurs within such brief moments. This is where our performers find a bridge that connects Juons kaleidoscopic tone poem with Tchaikovskys colossal Piano Trio, op.50, a musical epitaph for pianist and conductor Nikolai Rubinstein, who had been Tchaikovskys friend and mentor. Rubinsteins unexpected passing in 1881, when he was only 45, had a profound effect on the young Tchaikovsky, who dedicated the only piano trio he ever wrote to his late friend, adding the subtitle À la mémoire dun grand artiste.

Tchaikovskys work consists of only two monumental, thematically related movements. Beginning with a heartfelt cello cantilena, the first one is an extensive elegy or Pezzo elegiaco: an immense variety of musical ideas flow together in this sonata form with exposition, development, and reprise. The second movement consists in a seemingly endless set of variations. According to his friend Nikolai Kashkin, Tchaikovsky wanted to paint a musical portrait of Rubinstein in different phases of his life.

Whether that be true or not, this is indeed a musical broadsheet of illustrated character variations. Particular mention can be made of the third variation, a brilliant piano caprice, the fifth, where the piano imitates bell chimes, the sixth in form of a waltz, and the elaborate fugue in the eighth. The twelfth variation-cum-finale sets in powerfully and energetically but harks back to the first movement by concluding with a poignant funeral march.