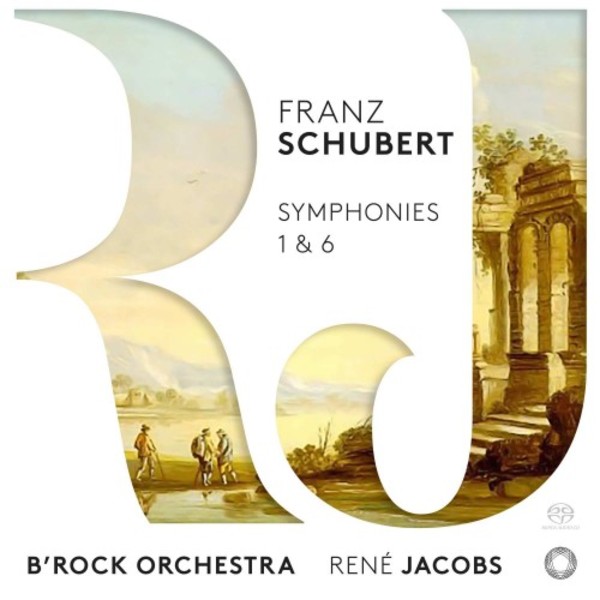 On his first album released on Pentatone, multiple prize-winning conductor René Jacobs finally records Schubert, his first great musical love. Jacobs delivers his fresh perspective on the favourite composer of his youth together with the exceptional players of the BRock Orchestra, acclaimed for their inspired playing, musical curiosity and original approach to the classics.

The album contains Schuberts First and Sixth symphonies, written when he was still a teenager. With this recording, Jacobs and the BRock Orchestra lift out the maturity and depth of these two early works. Whereas the First has a more classical, bubbly quality, the Sixth shows Schuberts inclination to musical Romanticism. At the same time, these symphonies have much in common: both display humour and joie de vivre, with carnivalesque allusions to early nineteenth-century Italian opera, but behind the happy façade lies a deeper layer, full of melancholy and bitterness. In that respect, these works fully capture Schuberts personal life: that of a social, lively man, plagued by the knowledge of his fatal illness. They are performed on period instruments, transparent, but full of fire.

On this dazzling new release from the outstanding Pentatone label (renowned for its excellent sound and high production values), conductor René Jacobs returns to one of his first loves: the music of Franz Schubert. In the company of the youthfully exuberant BRock Orchestra, he presents two of the composers less frequently heard symphonies: the First and the Sixth. Drawing on his experience in the classical repertoire, and the operas and symphonies of Mozart in particular, Jacobs leads performances brimming over with life, abundant in detail and rich in insight. Its not just the gestures and formal plans that he understands, but also the dynamic nuances and even the significance of certain keys and modulatory schemes, as is evident in his detailed booklet commentaries.

The performance of the First Symphony (composed by Schubert at the tender age of sixteen) breathes life into the music like few others. With an imposing slow introduction redolent of Mozart in grandest operatic mode, the first movement positively bristles, D major trumpets and drums cutting through the textures, characterful woodwind and elegant strings already offering glimpses of distinctively Schubertian lyricism. The G major Andante slow movement (no dawdling here!) alternates pastoral charm with E minor bitterness and pain, while in the distinctly pacey minuet Jacobs attention to detail (such as the first horns syncopation in the very first phrase) helps to avoid any hint of the cumbersome. The Trio is a delight, evoking Haydn in full bucolic mode, with hurdy-gurdy-style drones. And the bustling Allegro vivace finale is a cracker, fast but not too dangerously so, ensuring that the grandiose conclusion makes plenty of impact. With brilliantly alert playing from all sections of the orchestra, this is a recording that should raise the profile of this underrated symphony considerably.

Dating from five years later, the Sixth Symphony, though better known, is often referred to as the Little C major, as if it were something of a poor relation of Schuberts last great work in the genre. Yet once again Jacobs and the BRock Orchestra lift the work up from its relative obscurity, revelling in the Beethovenian accents, the deftly-scored digs at Rossini, and also the quintessentially Schubertian bittersweetness of the whole. Brass and drums give the music-making a thrilling edginess, and the woodwind (especially the oboes and clarinets) again bring plenty of character, while strings and wind together are bitingly alert in the outer movements. Here too, the Andante second movement is the soul of the work, combining grace, tenderness and a barely-touched-upon darkness; references to Haydn and Mozart are not lost on Jacobs, fusing into a richly evocative performance.

In the Scherzo, the range of dynamics obtained from the period instruments is enviable, from pianissmi of great delicacy to fortissimi of urgent force and brilliant incisiveness. Jacobs and his players clearly relish the tangy earthiness of the Trio section, with its tangible hints of the village fairground. Jacobs sees the finale as a parade of carnival characters  five in all  and surely no other performance of this work has so successfully brought out either the sheer characterfulness of this music (Rossini once again in evidence) or its undertones of sadness. Few conductors are so skillful at balancing the tragic and the comic in Schubert as Jacobs is here: indeed, he emerges less as conductor and more as animateur in a company enterprise.

These are immensely thoughtful yet consistently captivating Schubert performances to rank alongside the very best, from Beecham to Abbado, all captured in exceptionally vivid sound by Pentatones engineers. Lets hope for more of these gems from the same team!

Jacobss Mozart and Haydn on period instruments are prized for a radical rethinking of tempo and dynamic. For Schubert he has chosen the funkily named BRock, a group based on 14 violins that clearly sees these miraculous, youthful efforts as spin-offs from older Viennese composers. The textures and tempi are bracing, the balance of woodwinds and strings favourable to the soloists, while the wit of the fast movements and forward momentum of the andantes are utterly infectious.  Hugh Canning
The Sunday Times 28 October 2018

Interesting sounds, Ive rarely heard the scherzo of the Sixth Symphony sounding quite so Beethovenian. I love the pungent bravery of the playing and the contrast between the scherzo and rustic trio. Its the new recording from BRock Orchestra conducted by Rene Jacobs whose extensive notes about what he hears in these two Schubert symphonies are as refreshing as the playing.  Andrew McGregor
Record Review (BBC Radio 3) 17 November 2018