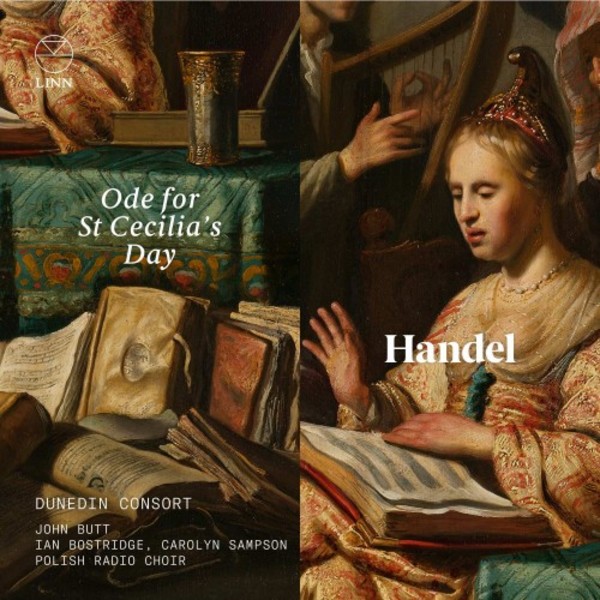 Recorded during the 2018 Misteria Paschalia Festival in Poland, the Dunedin Consorts performance of Handels Ode for St Cecilias Day sees them joined for the first time by tenor Ian Bostridge and soprano Carolyn Sampson. Bostridge demonstrates the technical mastery and vocal precision that has seen him win many of the major international record prizes in his twenty-five year career. Highly sought-after for her refined Baroque sensibilities and pure intonation, Sampsons lyric soprano is ideally suited to Handel.

Led by John Butt, with singers from the Polish Radio Choir, this rich and colourful tribute to musics patron saint is the latest in their much-lauded Handel discography, which includes Messiah, Acis & Galatea and Esther, each recording having won widespread acclaim. The recording is completed by Handels Concerto Grosso in A minor, op.6 no.4, in which the Dunedin Consorts exceptional instrumentalists take centre stage.

Under the musical direction of John Butt, the ensemble has established itself as the leading Scottish Baroque ensemble, performing at the nations major festivals and in Canada, Italy, Spain, Ireland, Germany, Belgium, Israel and France. In addition to a Grammy nomination, Dunedin Consort has won two Gramophone Awards: the 2007 Baroque Vocal Award for Handels Messiah and the 2014 Choral Award for Mozarts Requiem. Gramophone included Dunedin Consort in its Twenty Greatest Choirs list and three of its recordings have been named a Building A Library: First Choice by BBC Radio 3s Record Review. The Dunedin Consort broadcasts frequently on BBC Radio 3 and BBC Scotland.

They offer a dramatic immediacy of expression that scarcely any choir can match.  Choral Journal

Handel's score abounds with remarkable beauty, however, and this performance radiates life and personality.  The Sunday Herald

what counts is its joyous spirit and the way it matches the high level of Handel's inspiration.  Financial Times

Since they first appeared on the early music scene more than two decades ago, the Dunedin Consort under their founder and director John Butt have firmly established their reputation with a landmark series of recordings of Bachs vocal works that marry fastidious research with outstanding musicianship. But they also have a proven track record in the music of Bachs great contemporary, Handel, with acclaimed accounts of Messiah, Acis and Galatea and Esther to their credit. To those they now add the 1739 Song for St Cecilias Day (better known as the Ode for St Cecilias Day), and its just as compelling as its predecessors.

Originally programmed alongside the two-part ode Alexanders Feast for performance on St Cecilias Day, 22 November 1739, the St Cecilia Ode is the length of a single act (audiences of the time expected their vocal music served up in three substantial portions). The text, by John Dryden, celebrates the power of music to move human passions, as well as its basis in divine/cosmic science, with St Cecilia herself emerging as the central figure. Scored for soprano, tenor, chorus and a timbrally varied orchestra, its an engaging and surprisingly powerful work in the right hands, and Butt and his musicians give it their all.

The eight singers of the Dunedin Consort are reinforced by the twenty members of the excellent Polish Radio Choir, giving the choruses (particularly the exultant closing stanza) plenty of force combined with stylishness and clarity of enunciation. With starring roles for solo cello, trumpet, flute, lute and organ, the Dunedin instrumentalists are at the peak of their form. Theres a pleasing earthiness to the three-movement overture, and the strings are marvellously evocative, whether in the magical chords of the creation scene (When Nature underneath a heap) or in the spiky lines of Sharp violins complain). Katy Birchers flute solo and Paul Sharps trumpet illustrate even more powerfully than Drydens verses musics ability to rouse the senses, and the recording balance ensures that the important parts played by lute and organ (the latter representing St Cecilia herself) are heard in every detail.

Of course, the big stars in any performance of the Ode to St Cecilia are the solo soprano and tenor, and here this recording hits gold. Tenor Ian Bostridge draws the listener into the text, and his account of The trumpets loud clangour is both thrilling and vividly communicative. In the placatory and then revelatory soprano part is one of todays great Handelians, Carolyn Sampson. With meltingly gorgeous tones, a constant engagement with the text, and matchless phrasing, her performance really sets the seal on this performance, as it builds to its apocalyptically transformative conclusion when music shall untune the sky.

The other star is Butt himself: as ever, he shapes the music in an unforced, surefooted manner. Just as importantly, the narrative arc  the transition from one movement to the next and the sense of the works overall architecture  are never lost sight of, adding enormously to the overall musical experience.

As a coupling, Butt includes the A minor Concerto grosso, no.4 of Handels exactly contemporaneous Opus 6 set. Superbly played by the Dunedin instrumentalists, it is yet another absorbing example of musics ability to engage and move the passions, making it a perfect companion for the Ode itself. Butts customarily erudite and detailed notes, and an exceptionally fine recording from Krakóws Krzysztof Penderecki Hall all add up to make this an unmissable recording. And, with Cecilia-tide fast approaching, what better time to hear it?

Carolyn Sampsons many admirers should also look out for her soon-to-be-released disc of four of Handels brilliant early Italian cantatas, splendidly accompanied by the Kings Consort on the Vivat label. She really is the Handelian of our age!

This is yet another Baroque tour de force from Butt, who has a simple knack of turning highly informed intelligence and curiosity into performances fired by spontaneous combustion.
The Scotsman

The work packs a powerful punch in these hands, and nowhere more so than when Bostridge combines with the chorus in the aria hymning the double, double, double beat/Of the thund'ring drum.
The Herald

Butts tempos are daringly slow and his silences perfectly timed, bringing out the terse beauty of Handels vocal and instrumental lines. Bostridge bonds music to word-meaning so persuasively that they become a single heartfelt utterance, as in The Trumpets Loud Clamour.  Berta Joncus
BBC Music Magazine Christmas 2018

A single, brilliant soprano declaims a chorale melody, alternating with full chorus, and is then joined by a solo trumpet to soar to the heavens: The trumpet shall be heard on high/ The dead shall live, the living die/ And music shall untune the sky. Its one of the greatest moments in all of Handel, superbly realised by Carolyn Sampson and the Dunedin Consort under John Butt, working here with the Polish Radio Choir. Ian Bostridge adds his plangent imagination to Drydens vivid conjuring of music as the power that raises chaos into harmony, while Sampsons What passion cannot music raise and quell is vividly touching.  Nicholas Kenyon
The Observer 28 October 2018

Butts reading with the Dunedins and the Polish choir has irresistible sweetness, with the tenor Ian Bostridge and the soprano Carolyn Sampson on top form.
The Sunday Times 11 November 2018