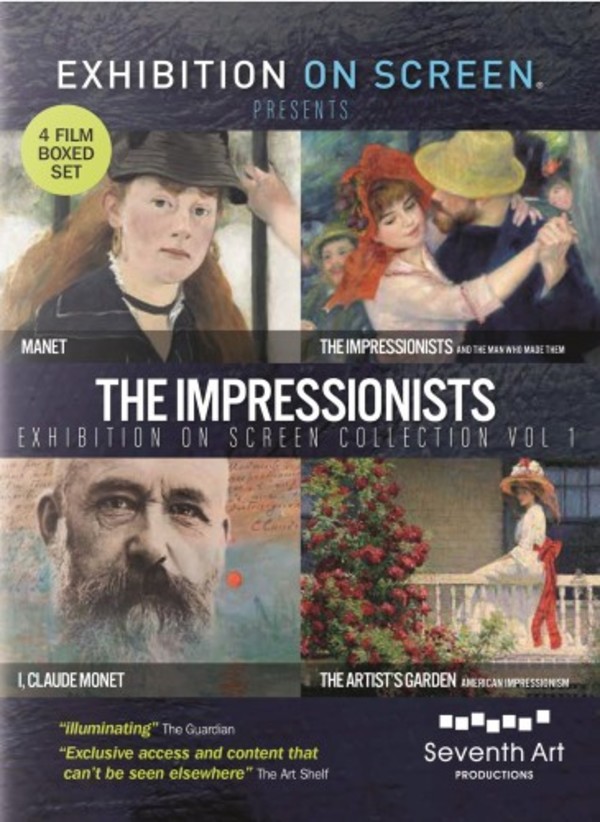 Four internationally celebrated films, first released in cinemas, and are now available together in this DVD set.

Manet
Enjoying exclusive access to a Royal Academy of Arts exhibition and behind-the-scenes at the shows preparation this film is a fascinating close-up of Manets works; a detailed biography; and an exploration of 19th century Paris plus fascinating opinions of special guests, experts and contemporary artists.
- Duration 90 plus bonus extras
- Subtitles: English, Dutch, French, German

The Impressionists and the Man Who Made Them
This, the most comprehensive film ever made about the Impressionists, focusses on an exhibition of paintings collected by 19th-century Parisian Paul Durand-Ruel who supported this new wave of art. Degas, Manet, Monet, Renoir, Sisley, are among the painters he helped establish through his galleries in London, New York and Paris.
- Duration 87 minutes
- Subtitles: English, French, German

I, Claude Monet
Shot on location at the very spots where Monet painted, this film is a fresh and intimate cinematic exploration of some of the most loved and iconic scenes in western art. Monets letters provide new insights into the man behind the sun-drenched canvasses - perhaps the most influential painter of the 19th and early 20th centuries.
- Duration 90 minutes
- Subtitles: English, Dutch, French, German, Spanish, Japanese

The Artists Garden: American Impressionism
Childe Hassam, William Merritt Chase and Philip Leslie Hale were celebrated artists belonging to the American impressionist movement. Its a story closely tied to a love of gardens and a desire to preserve nature at a time of rapid urbanisation in America. This mesmerizing film is a feast for the eyes.
- Duration 87 minutes
- Subtitles: English, Dutch, French, German, Spanish

Rembrandt: From The National Gallery and Rijksmuseum Amsterdam

Leonardo: From the National Gallery, London