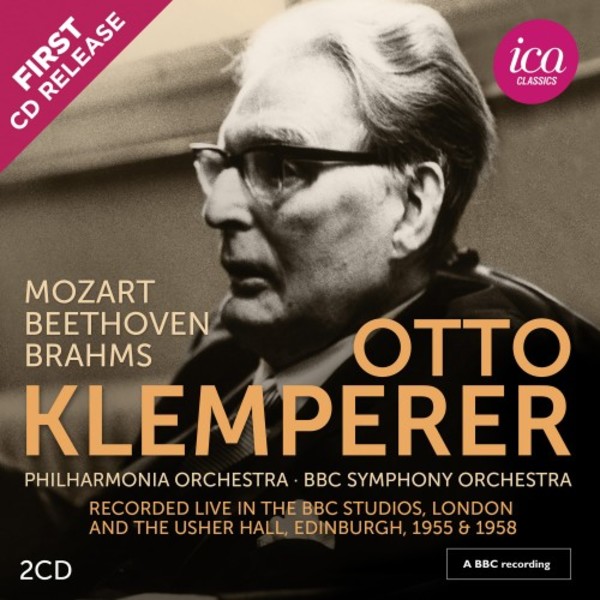 This is the second release of Otto Klemperer (1885-1973) following ICA Classics best selling 4-CD set of the conductor. It also features live broadcasts that have never been issued before. Rob Cowan wrote in Gramophone of the recent 4-CD set when comparing the studio accounts with the live performances: Viewed overall, what we have here is the Klemperer we already know and love but granted wings and, trust me, you can tell the differences almost straight away.

Klemperer idolised Mozarts Symphony no.25 and he was largely responsible for its elevation after almost 150 years of neglect. This broadcast with the BBCSO recorded in the BBCs Maida Vale Studios in 1955 has never been issued before. It is faster by a minute than his studio performance from 1956 with the Philharmonia.

The 1958 live broadcast of Beethovens Symphony no.5* with the Philharmonia Orchestra from the Usher Hall, Edinburgh is described by Richard Osborne: From the entry of the trombones in the finale to the works incandescent close, this is a performance that genuinely gathers itself to greatness. It is, astonishingly, over 5 minutes faster than Klemperers studio account from 1959! (*This authorised BBC broadcast of Beethovens Symphony no.5 is from another collection.)

Brahms always had a special appeal for Klemperer and his studio recording of the German Requiem has justly been acclaimed. In this 1955 live broadcast with the BBCSO and Chorus, Klemperer chose the 22-year old baritone Hans Wilbrink who would have a distinguished career at the Munich State Opera, and Elfriede Trötschel, a well known lyric soprano in Germany and a protégée of Karl Böhm. Klemperer is almost 5 minutes faster here than in the 1961 studio performance and according to Richard Osborne: Such is his command of the work, nothing seems rushed. No words are blurred, no note is casually delivered. Gramophone described Klemperers studio performance: Klemperers reading of this mighty work has long been famous: rugged, at times surprisingly fleet and with a juggernaut power.

This release (Mozart and Brahms) has been sourced from the Richard Itter archive of live recordings. The collection is very important for collectors because it has never been released before onto the market. Following the archives launch in October 2017 with releases featuring Beecham, Böhm, Cantelli, Karajan, du Pré, Klemperer and Rostropovich, it has received universal praise from both the classical media and record collectors for the excellent sound and performances.