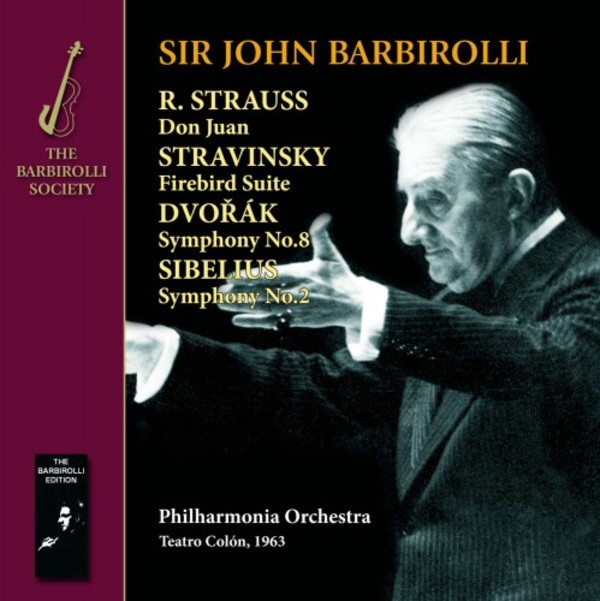 The performances conducted by Barbirolli were broadcast whilst on a South American tour with the Philharmonia in August 1963 in the Teatro Colón, Buenos Aries.

These performances by an orchestra with which Barbirolli soon struck up a close association following his return to EMI in 1962 (his first recording under this new contract was with the Philharmonia Orchestra) is particularly interesting, in that the programmes on this relatively extensive South American tour included music with which Barbirolli was not closely associated publicly  either with the composers or the individual works.

So we have two symphonies, by Dvořák and Sibelius, which were, one might say, staples of his repertoire, alongside two works which he much less-rarely programmed  played by an orchestra of international renown whose association with Barbirolli was not, at the time, considered to be particularly close.

Barbirollis grasp of the evergreen Dvořák G major Symphony is total  a really vivid performance in fine style, perceptible through the rather dated broadcast sound, a reading which adheres pretty strictly to the score with refreshing effect, especially of the entrancing third movement. All-in-all, here is a vivid and sunlit performance of this exceptionally beautiful and vigorous symphony, as spacious and expressive as the music deserves.

Barbirollis reading of the Second Symphony of Sibelius is equally fine; a beautifully turned account and one would have thought conductor and orchestra had been partners in this masterpiece for years.

In the less-frequently-encountered scores in Barbirollis repertoire, as we can hear all too clearly, the performances of the Strauss and Stravinsky works rank highly. Both accounts are exceptionally clear-cut, without ever sacrificing the warmth that  even in early Stravinsky  forms part of the pictorial narratives of each masterpiece.

Such is the range of expression in these concert performances that one can  at the distance of more than half-a-century  claim each one to be of a standard such as is rarely heard in live performances at any level today, the brilliance and sensitivity of the Philharmonia Orchestra readily apparent across the intervening decades. The audiences in South America must have been thrilled at the outcome of this visit by such distinguished musicians  as we can readily hear and acknowledge.