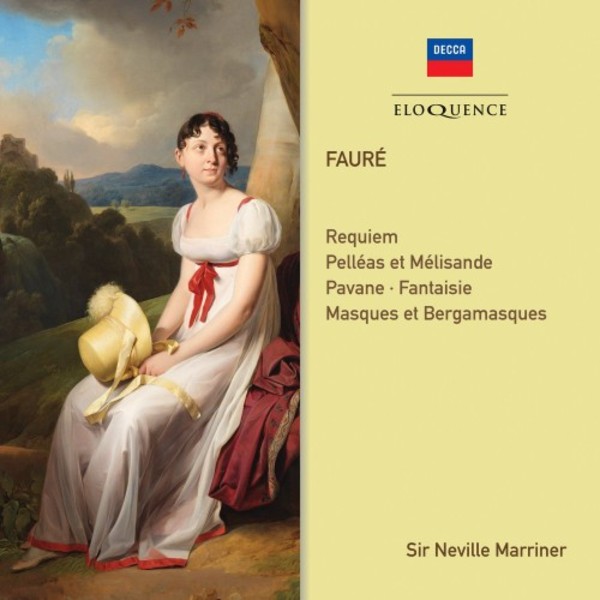 Fluent and luminously textured accounts of Faurés major choral and orchestral music, compiled on CD for the first time.

After the death of Sir Neville Marriner in October 2016 at the age of 91, Eloquence pays tribute to the conductors work on record with a Requiem  and the most gently consoling Requiem of them all - by Fauré. For this Philips recording in 1993, Marriner and the Academy of St Martin in the Fields were joined by a distinguished pair of soloists, baritone Thomas Allen and the soprano Sylvia McNair, who were critically praised at the time for their authoritative and sensitive contributions to a performance that achieves tenderness without sentimentality.

The breadth of Marriners repertoire and his extraordinary, almost unrivalled industry in the studio is amply demonstrated by the November 1982 issue of Gramophone, which contains reviews of no fewer than four new recordings by the conductor  and with three separate orchestras. As well as cello concertos with the Cleveland Orchestra, Offenbach overtures with the Philharmonia and Handel organ concertos with the Academy, an Argo LP of Faurés orchestral music  reissued complete here  was welcomed in terms which have become familiar to record-buyers down the years: for the conductors unobtrusive good taste, for the polish of the Academy players, highlighted by the exquisite solo contribution to the Fantaisie of the orchestras long-standing principal flute, William Bennett, and for the harmoniously balanced Argo recording in the London church of St Johns, Smith Square.

Marriner and his players have an affectionate approach, with plenty of sensitivity in their shading and no lack of strength either, but all is accomplished at a tempo that has nothing over-insistent or pretentious about it.  Gramophone, January 1996 (Requiem)