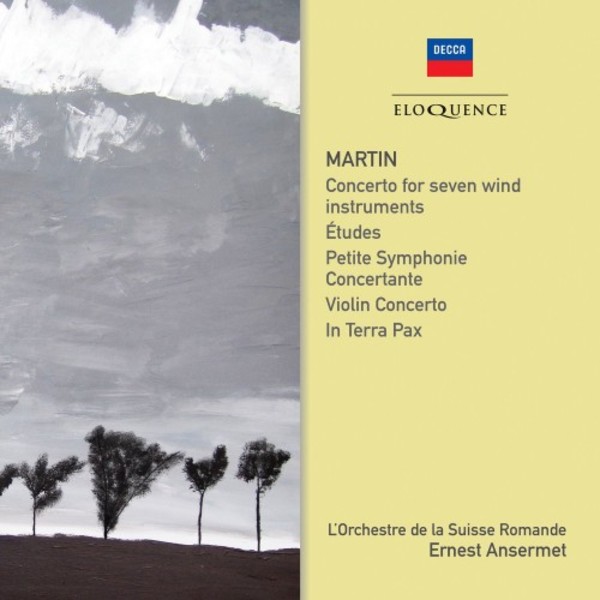 Ernest Ansermets complete Decca recordings of Frank Martin. The Swiss conductor regarded his countryman Frank Martin as one of the two great composers of his time. He rejected the atonal system of music as without musical meaning and even, late in life, turned against Igor Stravinsky, whom he had championed earlier in his career. In a 1962 interview, he claimed that only Martin and Benjamin Britten were composing masterpieces: they do as well as they can in a troubled historical situation.

Ansermet was true to his word in both performing and recording the major works of Martin. On CD 1 of this anthology are authoritative, superbly animated accounts of the composers neo-classically structured instrumental masterpieces, the Petite symphonie concertante and the Concerto for seven wind instruments, timpani, percussion and string orchestra, as well as the less-often heard Études for string orchestra. CD 2 opens with the Violin Concerto which Martin dedicated to the soloist on this recording, Wolfgang Schneiderhan, and the set is completed with Martins wartime oratorio In terra pax.

Ansermet gave the first performance of the oratorio in 1945, and he remains the most powerful advocate on record of this yearning plea for peace in desperately troubled times. This music was, in the words of the conductor, the expression of a faith; not because Martin set religious texts, among other things, to music - one can also do that without faith, and conversely, faith can be expressed in a fugue - but because if an impetus goes beyond simple symmetry, if it expands, and acquires a new momentum, it is because it is supported by a faith - and this is how Frank Martins music behaves all the time, just like the music of Bach and Handel.

An extraordinarily fine performance. Ansermet is just the man for a composition like this which is at once intellectually conceived yet capable of yielding attractive sensuous effects ... Schneiderhan brings a fine combination of ardour and discipline to his contribution. The balance is flawless, and the recording first-rate  Gramophone, February 1956 (Violin Concerto)

The third section [...] is particularly magnificent, thanks in no small part to Marga Höffgens superlative singing; but all the parts are beautifully sung and played, and the recording engineers have taken their roles accordingly.  High Fidelity, December 1964 (In terra pax)