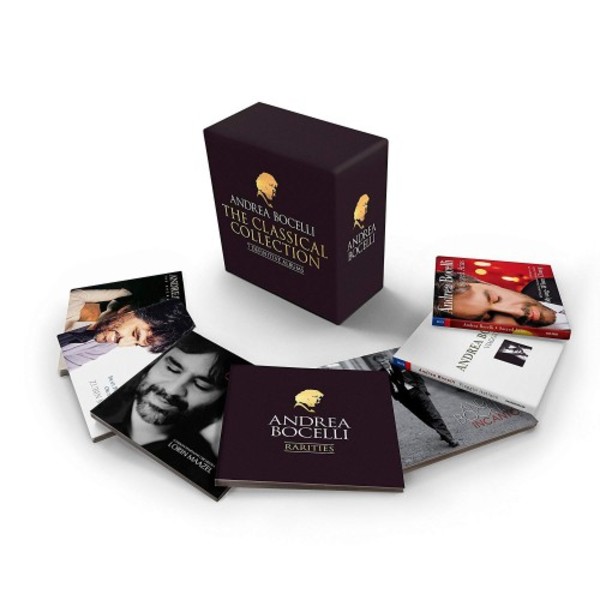 Seven definitive albums remastered: six of Andrea Bocellis greatest studio albums  his Classical albums  in one beautiful set, plus a new album of Rarities and Out-takes, including never before released material.

Newly remastered by Sugar and housed in a deluxe presentation box with gold hot-foiling.

Andrea Bocelli is blessed with timbre as recognisable as a signature, full and powerful, with a versatility ranging from the belcanto to the furore of verismo, from the sacred repertoire to popular ballads; and possesses an extraordinary and unique sensibility which transforms and transcends boundaries, causing him to excel in his interpretation of the lyrics, in his perception of the subtleties of musical expression.

His first classical recording (1997) entitled Viaggio Italiano was a Caterina Caselli Sugar project undertaken with the Moscow Radio Symphony Orchestra: spanning Puccini to Schubert, Verdi to Donizetti. 1998 saw the release of Aria: The Opera Album, with the Orchestra of the Maggio Musicale Fiorentino directed by Gianandrea Noseda. The dawn of the new millennium was marked by a recording of Sacred Arias with the Orchestra and Choir of the National Academy of Saint Cecilia conducted by Myung-Whun Chung: a project which remains one of his most shining artistic productions and the best-selling classical album ever released by a solo artist.

Under the baton of Zubin Mehta, the start of the millennium celebrated the release of the Verdi album and in the autumn of 2002 Andrea Bocelli combined his energies with those of Lorin Maazel, with whom he undertook a very special recording project: Sentimento, a collection of romantic pieces by composers such as Tosti, Denza and Gastaldon, arranged for the orchestra by M° Maazel, who also accompanied Bocelli on violin. The project was an enormous success earning Andrea a double nomination at the 2003 Classical Brit Awards, where he won both Album of the Year and Best-Selling Classical Album of the Year. Similarly, in 2008, a new album Incanto was a sell-out success.

I dont think one decides to become a singer: It is decided for you by the reactions of the people around you.  Andrea Bocelli

The more I immerse myself in singing the less I understand, I only know that God has given me a voice which allows me to express what I feel, and in this sense I believe I can describe it as a recognizable voice.  Andrea Bocelli

Andrea is an operatic tenor with a voice of rare beauty. His sense of romance and melody goes beyond the very essence of Rodolfo the bohemian.  Franco Corelli