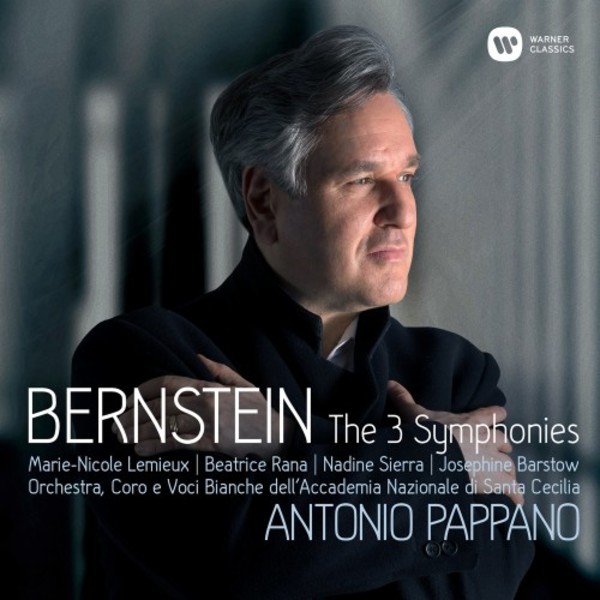 I find these symphonies revelatory in the true sense of the word, says Pappano. They are  hugely emotive and personal  At heart, Lenny was filled with the desire for the brotherhood of man to be something real and  concrete  As a great Renaissance man, he was trying to make the world good.

2018s two big musical centenaries, the death of Claude Debussy and the birth of Leonard Bernstein, have both seen swaths of reissues alongside a number of notable new releases. But possibly the biggest splash by any new Bernstein recording will be this timely reappraisal of his three symphonies, by Romes Orchestra dellAccademia Nazionale di Santa Cecilia under music director Antonio Pappano. Squeezed out between Bernstein the conductor and musical communicator on the one hand, and Bernstein the composer of the popular hit West Side Story on the other, Bernstein the serious composer too often gets short shrift, but this two-disc set of these frequently overshadowed (and by no means unproblematic) works will do much to redress the balance.

In his later years, Bernstein had a close and fruitful relationship with the Santa Cecilia Orchestra, as witnessed not just by several DG recordings but also by a series of photographs from the orchestras own archives, reproduced in the handsomely illustrated deluxe booklet of this Warner double album. From 1983 until his death he was also the orchestras honorary president. So it is entirely fitting that the orchestra should offer this substantial centenary tribute of their own, and they do so with resounding commitment and considerable success. Pappano himself witnessed Bernstein in masterclasses at Tanglewood, and was even interviewed for a job as his assistant on a recording project. More importantly, he has a similar dedication to expressive commitment that shines through these performances, while his ability to reveal clarity of structure is a considerable strength in works that can too often seem formally diffuse.

Spanning a period of less than twenty years, the three symphonies are remarkably contrasted works, though all are concerned with issues of faith in its broadest sense. No.1 was composed in 1942 and takes as its theme the biblical figure of Jeremiah, who against a background of religious decay prophesies the destruction of the Temple, a prophecy fulfilled when it falls to the Babylonians. The Symphonys concluding third movement sets text from the Lamentations of Jeremiah, sung here by mezzo-soprano Marie-Nicole Lemieux in gloriously rich voice. The opening movement (Prophecy) has a powerful sense of foreboding, with more than a hint of Shostakovich about it, while the jazzy cross-rhythms of the second movement (Profanation) keep the various sections of the orchestra on their toes.

Composed in the aftermath of World War II, the Second Symphony (1949) was directly inspired by W.H. Audens extended poem The Age of Anxiety, whose shattering virtuosity had struck a profound chord with Bernstein. In Part 1 of the symphony, four strangers (three men and one woman) are gathered in a wartime New York bar. As they talk they gradually reveal their characters, the conversation and sense of camaraderie fuelled by alcohol. In part 2 they catch a cab to the womans apartment (The Dirge), where they are determined to party (The Masque), but the mood is hollow and the gathering peters out. Part symphony, part suite, part piano concerto (the piano being Bernsteins own instrument, a representation of the composers self), the work receives a superb performance here. Soloist Beatrice Rana excels not just in the bebop shenanigans of the Masque movement (to which she takes as a duck to water) but also in the powerful introspection of the Dirge and Epilogue.

Most difficult to bring off in performance is the Third Symphony, Kaddish (1963, rev. 1977), a defiant prayer in which God is confronted, and which employs speaker, soprano soloist, choir and childrens choir as well as a large orchestra with extensive percussion. Dedicated to the memory of John F. Kennedy, it includes some of Bernsteins most adventurous music (there are serial passages, but tonality eventually wins the day), but the biggest challenge is one of tone: all too often, it can take on a mawkish sentimentality hard to stomach. Not so here. Narrator Josephine Barstows authoritative, controlled delivery makes a powerful case for the work, as does Pappanos taut direction, and the combined choral and orchestral forces of the Saint Cecilia Academy, together with soprano Nadine Sierra, give their all. The work builds to a powerful, uplifting conclusion, enough to silence even the harshest critics.

This thank you to Bernstein from Pappano and the Saint Cecilia Orchestra ends with a virtuosically thrilling, ballsy performance of the Prelude, Fugue & Riffs originally written for Benny Goodman, the clarinettist here being the brilliant Alessandro Carbonare. It benefits enormously from Pappanos own jazz experience, and provides the cherry on a most impressive 100th birthday cake. With sumptuous packaging and an excellently focused recording (even in the large-scale passages of the Third Symphony), this is a birthday present that all can enjoy, and it now surely heads the field in these works.

Let me say straight away that these performances come at us with a theatricality that puts them firmly on stage where they belong. ... Pappanos choice of the audacious young Italian pianist Beatrice Rana  a rising star if ever there was one  is right on the money. She has the razzle-dazzle in spades, of course, but it is the mercurial throwaway manner (cool, and then some, the jazzy Masque at the heart of the piece brilliantly on point) that really excites. ... [Josephine Barstow] is tremendous and far and away the most exciting, the most affecting, the most probing narrator of any on disc. ... [she] makes the piece [Symphony No 3] work as never before...  Edward Seckerson (Recording of the Month)
Gramophone September 2018

The sets considerable saving grace lies in the electric spark of Pappanos live performances and the soloists' star turns. Beatrice Rana glitters away at the piano as the observer of inner turmoil in Anxiety... these must be the symphonies' most accomplished recordings.  Geoff Brown
BBC Music Magazine October 2018

No 3, Kaddish, drawing from the Jewish prayer for the dead, is perhaps the hardest to bring off. Its where Pappano and his top-notch orchestra are particularly successful. With Josephine Barstow as narrator and a crisp, committed performance from the musicians, the work loses that old tendency to embarrass, and gains a natural dignity and joy. This is an invaluable set for anyone wanting to know more of Bernsteins concert works.  Fiona Maddocks
The Observer 5 August 2018