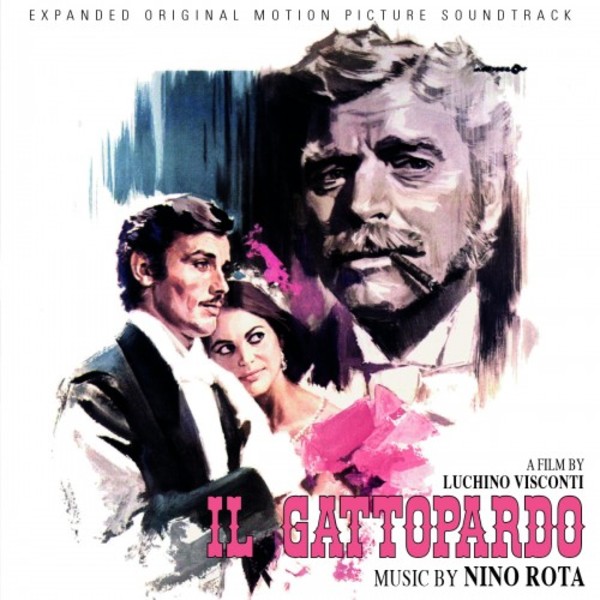 Based on a popular novel by Giuseppe Tomasi di Lampedusa, The Leopard is about the Prince of Salina (Lancaster), a noble aristocrat of irreproachable integrity, who tries to preserve his family and class amid the tumultuous social upheavals of 1860s Sicily.

Although they only worked together on three films, Nino Rota's collaboration with Visconti was almost as important for the composer as his famous partnership with Fellini. The scores for Le notti bianche (1957), Rocco and His Brothers (1960), and Il Gattopardo (1963) revealed to audiences a more symphonic, mature, romantic, and very different composer from the one who composed the lighter, more circus-like scores for Fellini.

At Visconti's request, Rota based much of his Leopard score on a symphony he had composed in the '40s but which wasn't premiered or published until the '70s. The music is boldly dramatic and romantic in tone, sometimes calling to mind the spirit of Tchaikovsky. A previously undiscovered waltz by Giuseppe Verdi also figures prominently in the score - in a ball scene where it is surrounded by original Rota dances very much in the style of the period.

Rota's score has had a long and somewhat convoluted history of authorized commercial releases. This Quartet release features, for the first time, the entire score sequenced in film order, restored and mastered by Chris Malone, using first-generation tapes from the CAM archives (mostly mono session elements and mono album masters), vaulted at Sugar Music Italy, as well as the Rota-approved LP programme issued in 1979 (remastered from the best sources - mostly two-channel stereo). Extras include cuts from stereo album masters, alternate takes and a few curiosities. The package includes a luxurious 20-page booklet with detailed liner notes by Frank K. DeWald.

The Morricone Duel: The Most Dangerous Concert Ever (DVD + LP)