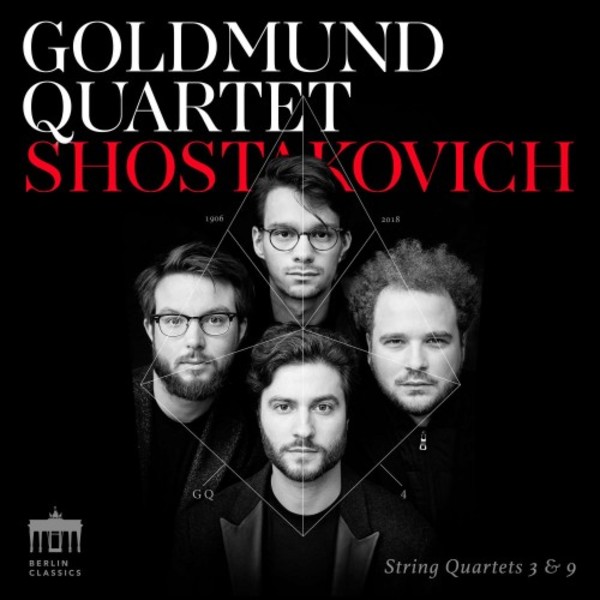 Following on from their highly acclaimed first album featuring three quartets by Haydn, the Munich-based Goldmund Quartet now celebrates its debut on the Berlin Classics label. Florian Schötz, Pinchas Adt (both violin), Christoph Vandory (viola) and Raphael Paratore (cello) take a leap  not just in time, but from a musical point of view. Their programme here features Shostakovichs String Quartets Nos. 3 and 9.

Since making its debut at the Prinzregententheater in Munich, this young and ambitious quartet, described by the Süddeutsche Zeitung as possessing decidedly appealing musicality with a truly individual signature, has become popular on the music stages of Europe and further afield. The four musicians, who have known each other since their school days, gained significant musical impetus from members of the Alban Berg Quartet, as well as from the likes of Günter Pichler in Madrid and the Artemis Quartet in Berlin. They have attended master classes with numerous renowned quartets such as the Hagen, Borodin, Melos, Belcea, Ysaye and Cherubini quartets, and have responded to input from artists such as Ferenc Rados, Eberhard Feltz and Alfred Brendel as they pursue their constant search for more knowledge and experience.

Winning second prize and the Special Prize at the 2018 International Wigmore Hall String Competition for the best interpretation of a 20th-century quartet is proof that these four musicians know what they are doing when it comes to performing Shostakovich: The greatest challenge is that this music is so extreme. Elation, incredible downs, unbelievable sadness. You need to immerse yourself in these different emotional moods. By selecting Shostakovichs String Quartets Nos. 3 and 9, the Goldmund Quartet throws light on the contrasts between the two works, which reveal the various facets of the man we know as Dmitri Dmitrievich Shostakovich. The deep impression that the second world war made on him, his tribulations with the Soviet regime  he was never without a goal, yet he was often a lost soul. It is always interesting for us to observe how a composer developed. We found these two quartets very rich in contrasts, right from the word go. That makes us want to hear more!

The Art of Konwitschny Vol.2