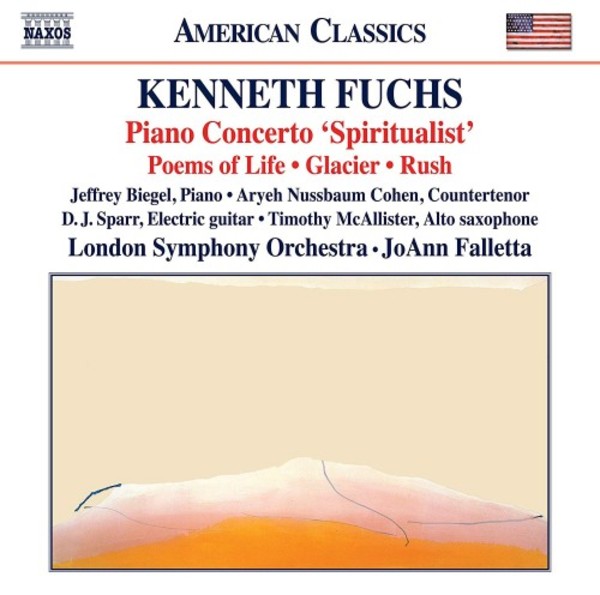 Kenneth Fuchs is one of Americas leading composers. He celebrates his unique fifteen-year recording history with conductor JoAnn Falletta and the London Symphony Orchestra with this stunning release of three new concertos and an orchestral song cycle.

Each new release of Kenneth Fuchss work with these forces is eagerly anticipated, and this series of LSO discs for Naxos is easily spotted due to a distinctive look that uses the art of Helen Frankenthaler for all of their covers. Previous recordings have included An American Place (8559224) which was nominated for two Grammy Awards; a bright, big-hearted, neo-romantic work in the style of John Adams Harmonielehre JoAnn Falletta leads first-rate performances with the London Symphony Orchestra, captured in excellent sound  another fine addition to Naxos American Classics series (ClassicsToday.com). Atlantic Riband (8559723) was also Grammy nominated, in performances [that] are hand-in-glove with the composer (Gramophone).

Pianist Jeffrey Biegel was described by Leonard Bernstein as a splendid musician and a brilliant performer, and his Naxos recordings include Leroy Andersons Piano Concerto (8559313) and works by Ellen Taafe Zwilich (8559656) of which Jeffrey Biegel is no stranger to these pagesand once again distinguishes himself with technically accomplished performances (Classical Lost and Found).

Saxophonist Timothy McAllister is in constant demand as a performer and has been described as a titan of contemporary music and the instrument in general (The Plain Dealer, Cleveland).

American countertenor Aryeh Nussbaum Cohen is one of operas most promising rising stars. In the 20162017 season alone, Aryeh was named a winner of the Metropolitan Opera National Council Auditions, recipient of a Sara Tucker Study Grant from the Richard Tucker Music Foundation, First Prize Winner in the Houston Grand Opera Eleanor McCollum Competition, and winner of the Irvin Scherzer Award from the George London Foundation.

Electric guitarist D.J. Sparr has worked with conductor Marin Alsop and others, and was described as a terrific soloist by the Los Angeles Times.

JoAnn Falletta serves as music director of the Buffalo Philharmonic and Virginia Symphony, and is the principal guest conductor of the Brevard Music Center of North Carolina. Recipient of the Seaver/ National Endowment for the Arts Conductors Award, winner of the Stokowski Competition, and the Toscanini, Ditson and Bruno Walter conducting awards, Falletta became the first female conductor to lead a major American ensemble upon her appointment as music director of the Buffalo Philharmonic Orchestra in 1999. Her Naxos recordings include the double Grammy Award-winning disc of works by John Corigliano and Grammy nominated discs of works by Tyberg, Dohnányi, Fuchs, Schubert, Respighi, Gershwin, Corigliano, Richard Strauss, Hailstork and Holst.

Fuchs - An American Place, Eventide, Out of the Dark