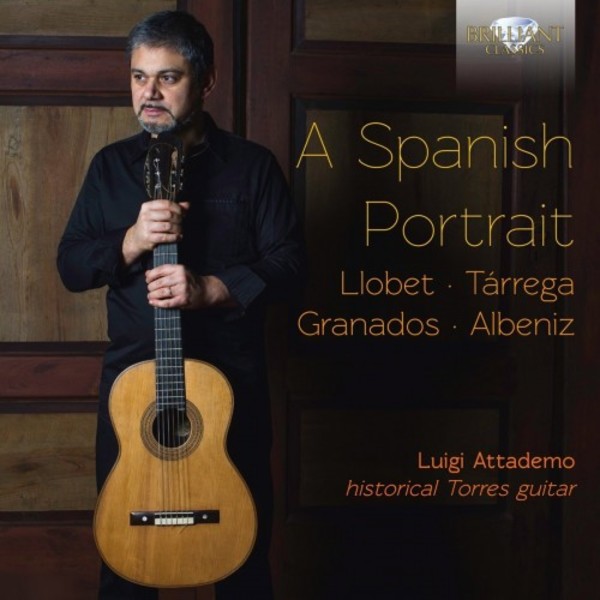 A musical portrait of a master guitar-maker of the 19th century.
Great instruments have always been associated with great musicians, and this is true in the guitar world too, at least from the early 19th century onwards. Early in his career, Antonio de Torres (1817-1892), like other luthiers before him, found a performer ideally suited to his instruments  the young Andalusian guitarist Julián Arcas. The technical innovations in construction and timbre pioneered by Torres enabled Arcas to give full expression to his artistry in works such as the florid Fantasía sobre El paño o sea Punto de La Habana with which Luigi Attademo opens this new studio album.
Of the generation after Arca, Francisco Tárrega quickly proved himself even more gifted in both performance and composition. So much so that Torres offered him a guitar he had made five years earlier and kept for his own use. This was the FE 17, which Tárrega continued to play for the next 20 years, and which came to define the sound of the Spanish guitar to generations of listeners.
A groundbreaking instrument in terms of its tonal range and sound potential, the FE 17 became critical to bothTárregas success and to the expansion of guitar repertoire during the 19th century: although he continued to compose using the traditional forms of the fantasia and theme and variations, Tárrega also focused on shorter forms borrowed directly from Romantic piano repertoire. With eight original works by Tárrega, Attademo demonstrates the full tonal-dynamic palette of Torress instruments. Further selections of popular repertoire by Llobet, alongside his transcriptions of Granados and Albéniz, take the guitars evolution through a more advanced stage, exploring different registers, radical harmonies and tone- colours.
This bold new concept album should attract the attention of all lovers of Spanish guitar. Luigi Attademo has recorded it using an original Torres SE 122 guitar which has been strung with gut rather than steel to further enhance the potential for experiencing this music in the thrill of its original creation.