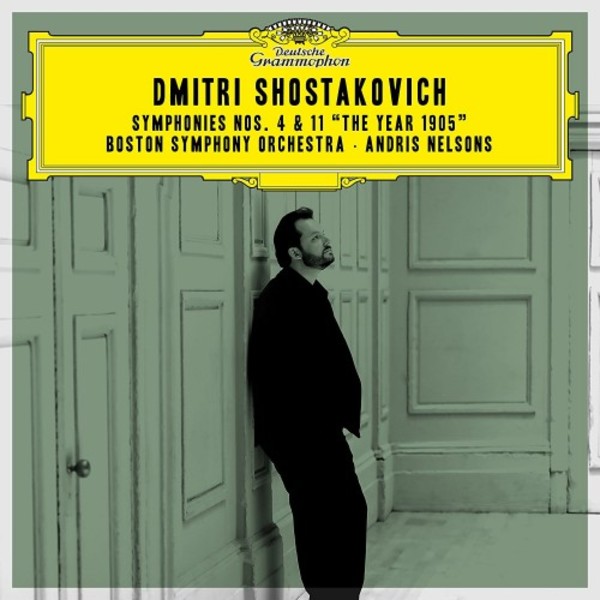 Andris Nelsons is the Music Director of the Boston Symphony Orchestra and new Gewandhauskapellmeister of the Gewandhausorchester Leipzig. With both appointments, and in leading a pioneering alliance between these two esteemed institutions, he is firmly underlined as one of the most renowned, exciting and innovative conductors on the international scene today.

After the scandalously successful (Sunday Times) Symphony No.10 in 2015 and the sheer expressive beauty (Gramophone magazine) of Symphonies Nos. 5, 8, 9 from 2016 Andris Nelsons and his Bostonians turn their attention to the extrovert Fourth and dramatic Eleventh  both recorded live for the third instalment of this long-term collaboration of the Boston Symphony Orchestra  America's most cultured orchestra (BBC Music Magazine).

Each of the symphonies has a specific political background

With its vast instrumental forces and epic length, the Fourth Symphony apparently was too difficult, raucous and pessimistic for Stalins Russia. But more importantly, officials were able to show that even an artist as celebrated as Shostakovich was not exempt from the Partys control. Shostakovich himself had to announce that he had withdrawn the symphony and the premiere scheduled in 1936 was canceled. The lost Fourth Symphony received its belated premiere in Moscow in 1961  twenty-five years later than planned. () overwhelming in its intensity, Nelsons conducting maintained a laser-like focus on the musics character and attained roof-lifting force (Boston Globe concert review). Rather notably: a young violinist Vyacheslav Uritsky played in that belated and very exciting premiere of the Fourth Symphony in 1961 and Mr. Uritsky also still plays in the BSO and these recordings.

The dramatic Eleventh Symphony commemorating the Revolution of 1905 was immediately hailed as a work of deeply Russian and national art. But it may have a double meaning: was it really the great patriotic work that Soviet officials heard in 1957? Until today it remains up to the listener to decide if Shostakovich also meant it as a critique of Soviet power in the wake of the Hungarian revolt of 1956. Among many other things, the Eleventh is music remembering music remembering an older dream of freedom. (Boston Globe)

Shostakovichs Fourth and Eleventh symphonies hold special places in his output: the Fourth, composed in 1935-36, was withdrawn before its planned premiere in the wake of an extraordinary attack made by the Communist Party hierarchy on the composers opera Lady Macbeth of Mtsensk in the now notorious Pravda article Muddle Instead of Music. The Symphony had to wait 25 years for its first performance, during the post-Stalin thaw, and it offers a valuable glimpse of the direction the mature Shostakovich might have taken had it not been for the severe ideological and artistic constraints at the height of the Stalin era. The Eleventh, meanwhile, though outwardly a vehicle commemorating the revolution of The Year 1905 (it duly won a Lenin prize in 1958), contains a notable personal element: Shostakovichs own father was apparently among the protesters on Bloody Sunday in February 1905, many of whom were killed by cossacks guarding the Winter Palace in St Petersburg. And, although its four movements are ostensibly based on events during that upheaval, some have also seen it as a requiem for a later generation, most specifically the crushing of the 1956 Hungarian Uprising.

The pairing is a fascinating and wholly successful one, and these new accounts, taken from live performances in Symphony Hall, Boston, make a handsome new addition to the steadily growing and critically lauded Shostakovich cycle from Andris Nelsons and the Boston Symphony Orchestra. This has long been regarded as the aristocrat among US orchestras, and the refinement of tone is everywhere apparent in a thrilling reading of the Fourth. From the very outset it grabs the listeners attention with its strident strings-and-xylophone opening, and Nelsons tight pacing (hes a good 5 to 10 minutes brisker than the average timing for the Symphony as a whole) means that the mood never flags. It also ensures that the formal imbalances of two sprawling outer movements framing a much shorter central intermezzo are minimised.

What impresses most about this performance of the Fourth is the combination of beauty, fragility, immense power, and an unerring feel for the musics long-term trajectories. Nelsons and his players point up the Mahlerian references in the central movement and the finale without overdoing them, while the sheer weight of the big tuttis in the outer movements is overwhelming. When the Symphony eventually reaches its emotionally spent conclusion, the listener feels a combination of exhaustion and exhilaration. Every section of the orchestra is on peak form here, from the abundantly characterful wind (too many solos to mention) and percussion, to the sumptuous yet brilliantly incisive strings. Among the latter, veteran second violinist Vyacheslav Uritsky actually played in the works 1961 Moscow premier under Kondrashin, and his glowing endorsement of Nelsons performance speaks volumes. This is indeed a performance to set alongside Kondrashins classic account, and for those wanting excellent modern sound with all the involvement of a live performance, this is now a clear first choice.

And the Eleventh Symphony is every bit as good. From the hushed tones of the opening, through the dark foreboding and violent outbursts of the second movement (depicting Bloody Sunday itself), to the heart of the work in the memorialising Adagio third movement and on to the defiant, celebratory finale, this is an exceptionally atmospheric and expressively involving performance.

The first movements distinctive trumpet calls once again evoke Mahlerian parallels, and the various revolutionary songs which form much of the works thematic fabric are deftly highlighted but nevertheless convincingly integrated into a cogent view of the Symphony as whole. Nelsons and his players also bring out the links with the Tenth Symphony (which they set down first in this cycle), the earlier works dark cynicism now transformed into an altogether more positive vision of hope triumphing over adversity. Even in the edgiest of tuttis, the Boston players retain that polished tone for which they are famous, yet the sense of involvement is palpable, the narrative thread astonishingly clear. Among the many excellent solos, first trumpet Thomas Rolfs and cor anglais Robert Sheena deserve special praise. Once again, Nelsons and the Boston Symphony establish what could well emerge as a new benchmark.

To have been at these live performances must have been a thrilling experience, and DGs engineers have caught them in superbly realistic digital stereo. This is certainly shaping up to be one of the most involving Shostakovich cycles of recent years, combining urgent commitment with tremendous musical polish and panache. Those collecting this cycle will know what to expect; for those new to it, this is as good a place as any to start!

This Nelsons cycle started with a bang  namely the most electrifying recording of the Tenth Symphony weve had in almost half a century. The excellence continues. In dramatic contrast to Mikhail Pletnevs intriguing but decidedly odd account of the Fourth Symphony, Nelsons roars into the opening march with a lethal precision that makes Pletnev sound positively flabby. ... Nelsons makes the icy chordings of the [Eleventh Symphonys] opening tableau  The Palace Square  sound almost hymnlike, the recollection of two prison songs intensifying the pathos of a movement with so little and yet so much on the page. ... Thrilling music, thrillingly realised.  Edward Seckerson
Gramophone September 2018

Nelsons keeps a firm grip on the unfolding of the drama [in the Eleventh Symphony]. And here, as in the Fourth, his Boston Symphony Orchestra with supreme virtuosity from every section. ... youll never hear these symphonies better played.  Anthony Burton (Orchestral Choice)
BBC Music Magazine October 2018