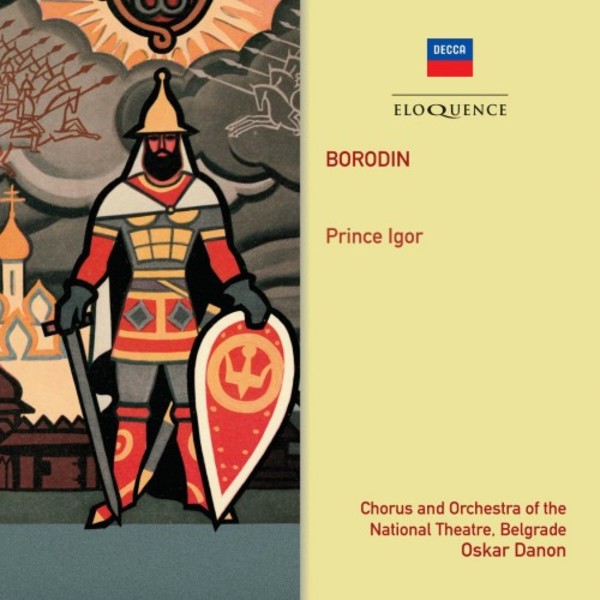 A first release on CD for the first recording in stereo (and entirely complete) of Borodins operatic masterpiece. With this and six companion issues to be released during the course of 2018, Eloquence makes available for the first time on CD the seven complete Russian operas recorded in 1955 by Decca with the company of the Belgrade Opera.

Fresh from a successful tour of Boris Godunov in Switzerland the previous year, the Belgrade Opera in 1955 was keen to make an impression on an international public. At the same time, the Decca company perceived a cost-effective but artistically assured opportunity to expand both its small but rapidly growing stereo catalogue (launched the previous year with Ansermet and the Orchestre de la Suisse Romande) and its opera discography with classics of the Russian opera repertoire which it had previously not been possible to record in the original language. In the event, the stereo versions were held back for the US market and only released in Europe in the 1960s, by which time the Belgrade Opera had acquired an international reputation for excellence thanks both to the mono issues and to its extensive touring schedule, which took in all the major European operatic centres.

The title role of Prince Igor on this recording is taken by Duan Popović (1927-2001), a company member of the Belgrade Opera (1951-60) who also sung the role with the Vienna State Opera and the Opera de Monte-Carlo. Popovich was joined by other stalwarts of the company such as Melanija Bugarinović, who also won acclaim as Erda at Bayreuth around this time, and the magnificently resonant bass of arko Cvejić as the wheedling Prince Galitsky. As Igors wife Yaroslavna, Valerija Heybal (1918-94) brings tremendous intensity to her two great set-pieces, with the kind of aristocratic vocal control that lent such lyric pathos to her singing of Tatyana in the Belgrade recording of Eugene Onegin (forthcoming).

The booklet for this newly remastered release prints both a synopsis and an essay by Peter Quantrill giving full historical context to the Belgrade opera recordings.

Oskar Danons handling of the score and the orchestral playing in this set are of a very high standard. - Opera, October 1955

To begin with, it gives us every note of the score ... Oskar Danon directs a well-shaped and convincing performance. - High Fidelity, June 1963

The performance is a real company effort and has the attendant advantage of sounding like a live one ... Popovich is a splendidly rich-voiced, virile Igor, who gives a moving portrayal ... it was a pleasure to hear again Bugarinovichs seductive-sounding Konchakovna. - Opera, May 1969