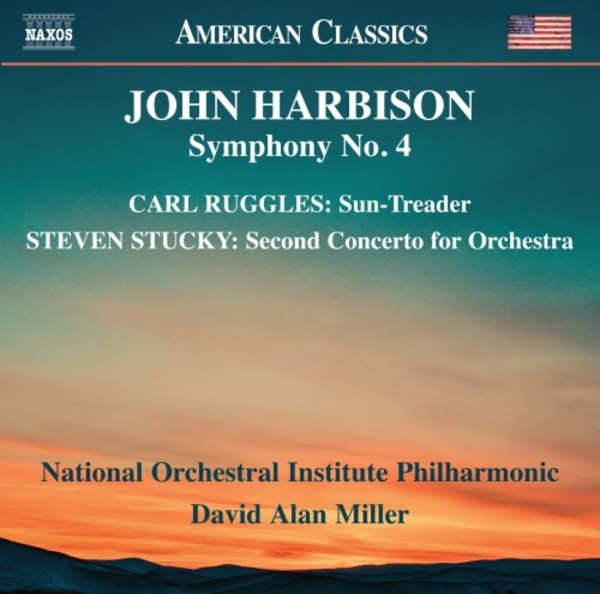 This is the third recording in a multi-year partnership between the National Orchestral Institute Philharmonic and Naxos to release one album of American music each year. A study in dramatic contrasts, Carl Ruggles Sun-Treader is an overwhelming, granite-hued tone poem by one of New Englands most original and uncompromising composers. Steven Stuckys luminous Pulitzer Prize-winning Second Concerto for Orchestra is a riveting exploration of sonority and sound-painting while John Harbisons Fourth Symphony is a big, bold, jazz-imbued work by one of Americas most important living symphonists.

This release brings together three American orchestral masterpieces in a program that will impress and delight in equal measure. The catalogues are not overwhelmed by alternative recordings of these works, through Carl Ruggles incredible early-20th-century score has justly been given wider attention.

Grammy Award-winning conductor David Alan Miller has established a reputation as one of the leading American conductors of his generation, his Naxos recordings including the recent release of Michael Daughertys Dreamachine (8559807). His work with the National Orchestral Institute Philharmonic (NOIP) has resulted in a recording of John Coriglianos First Symphony (8559782) that was considered mightily impressive by Gramophone, with MusicWeb International stating that David Alan Miller is an impressive guide to this work and to the entire disc.

The Naxos label's American Classics series is the source of a huge range of music, from established masterpieces via neglected gems to recent works from American contemporary composers. Their latest release  part of an ongoing collaboration between Naxos and the National Orchestral Institute  is an excellent addition to this absorbing series. It couples Carl Ruggles classic Sun-Treader (1926-1931) with two large-scale multi-movement orchestral pieces, both dating from 2004, by Steven Stucky and John Harbison. And it makes for a compelling 65 minutes of listening.

The disc kicks off with a brilliantly assured, sonically impressive and expressively intense account of Sun-Treader. This is a work that packs a powerful punch, taking its inspiration from a phrase in Robert Brownings 1832 poem Pauline, and the young players of the National Orchestral Institute  which meets every June to shape the professional orchestral musicians of the future  clearly relish its challenges. Ruggles took 5 years to write this 15-minute work, composed in his own particular brand of quasi-serial atonality. There have been several fine recordings of Sun-Treader over the years, but this one, recorded in the warmly sympathetic acoustic of the Dekelboum Concert Hall at the University of Maryland, emphasises the pieces Berg-like lyricism, without sacrificing the musics over-arching power.

With Stuckys Second Concerto for Orchestra, written for the Los Angeles Philharmonic, we enter a different world. Cast in three movements  Overture (with friends), a long central Variations movement and a Finale ‒ it is replete with deftly integrated quotations from and nods towards Stuckys musical reference points: Ravel, Stravinsky, Debussy and Brahms are all seamlessly woven in, providing reference points for the listener in turn. Stucky was a master orchestrator in his own right, and though the timings suggest a lop-sided work, the overall shape feels perfectly judged. And it makes an ideal piece for the NIOPs youthful musicians, with every section excelling in what is in effect a celebration of the symphony orchestra as a medium.

Finally comes John Harbisons five-movement Symphony no.4, composed inside-out, as it were, with the fourth movement Threnody written first, inspired by the near loss of a loved one. It provides the emotional core of the work, which has the jazzy overtones that are so distinctly American. The opening Fanfare movement is particularly enjoyable, mixing bombast with lightly-scored dance-like passages. The following Intermezzo provides a stark contrast, including magical gamelan-style passages for tuned percussion, while the Scherzo provides evidence of a keen wit, mischievous rather than overtly humorous. The Finale has about it a formal feel inspired by an Emily Dickinson poem (another root in the American cultural soil). Taken as a whole, this Symphony (originally composed for the Seattle Symphony) is in some ways more akin to a work like Janáčeks Sinfonietta, though the soundworld is completely different. But its a fine showpiece in its own right, and once again the NIO Philharmonic, under the expert direction of David Alan Miller, give it their all.

If youve not yet dipped into the American Classics series, this is an ideal starting point, combining the best of the past with two exceptional recent works. It certainly makes for a refreshing and instructive change from the ubiquitous Copland, Barber, Bernstein and Glass, and those who know this series already will readily snap it up. Highly recommended!

Theres a lot to enjoy in these vibrant performances, from the otherworldly atmosphere conjured up in Stuckys Concerto to the almost Disney-like bonhomie that pervades the Harbison.  Jeremy Pound
BBC Music Magazine August 2018