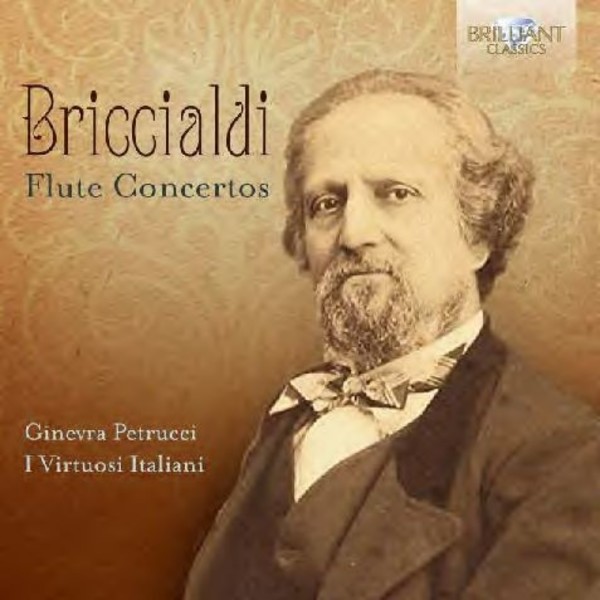 First recordings of four Romantic concertos by a Paganini of the flute.

This 2008 recording has been reissued to mark the 200th anniversary of the birth of Giulio Briccialdi (1818-1881). As a principal flautist in the major opera orchestras of Italy and across Europe, Briccialdi attracted renown not only for his performing virtuosity but also his ability to exploit and stimulate the rapid technical evolution of his instrument. A new flute was invented for him by Boehm and named after him. Further technical innovations were made in flute-manufacture at his instigation by Emilio Piana in Florence, where he was flute professor at the Istituto Musicale in Florence.

Although he wrote an opera and a symphony, his legacy as a composer rests upon his works for his own instrument. These include many chamber works for flute and piano: fantasias and operatic fantasias capitalising on the popular success of dramatic works, especially by Verdi. There are several attractive wind quintets and the Carnevale di Venezia op.78, a concertante work for flute and orchestra which has been recorded several times.

These four concertos represent some of Briccialdis most valuable and original works: conceived as a pinnacle of virtuosic display for the soloists skill, and based entirely on original material, Briccialdi mostly kept those works for his personal use. In fact the great majority of Briccialdis work remains unpublished and the scores of these concertos were only published earlier this year by the Italian firm of Ricordi. They are all cast in the standard three-movement concerto format, by and large as brief as they are attractive, and unfailingly well written for the soloist: one highlight is the two-minute Valse lento which forms the middle movement of the Fourth.

The concertos received their first recordings at the hands of Ginevra Petrucci, a Roman-born flautist who has worked with composers in Europe and the US and had several works written for her. The Flutist Quarterly praised her for beautiful phrasing, brilliant virtuosity and a legato worthy of a great singer.