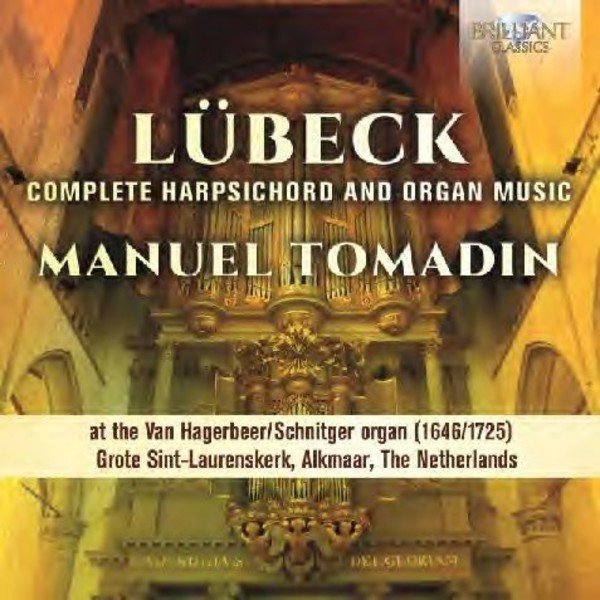 Unfortunately, until recently, the music of Vincent Lübeck (c. September 16549 February 1740) was simply regarded as northern German music from the 17th century in the pre-Bach era. This recording is the first edition to include all existing organ and harpsichord compositions by Lübeck as well as a series of previously unknown manuscript pieces.

Despite Lübecks fame during his long lifetime, few of his organ works are well known, yet his pieces for organ are the most important in his oeuvre. Influenced by Buxtehude and Reincken, Lübeck composed works that were both technically and artistically elaborate with frequent two-pedal virtuosic passages, five voices and other compositional elements rarely used by most of his contemporaries. Lübecks Clavier Uebung, written in 1728, consists of a single suite for harpsichord, with the traditional dances (Allemande, Courante, Sarabande and Gigue) preceded by a prelude and fugue and followed by a chaconne.

The S.M.G. manuscript from 1691 includes 45 short pieces for keyboard, many anonymous although five are attributed to Lübecks father, and it also contains the only known compositions by Lübecks son. These pedagogical pieces work well on a small historic harpsichord or clavichord, or on a small or regal stop organ. In fact, the dynamic markings in certain pieces indicate clavichord, considered to be the preferred instrument on which to learn keyboard technique. Their charm and melodic inventiveness make them a joy to play.

Organ performances recorded on the Van Hagerbeer/Schnitger organ (1646/1725) at Grote Sint-Laurenskerk, Alkmaar, The Netherlands in September 2017, and a positiv organ by Francesco Zanin (2012) at Silvelle di Trebaseleghe, Padua, Italy in November 2017.