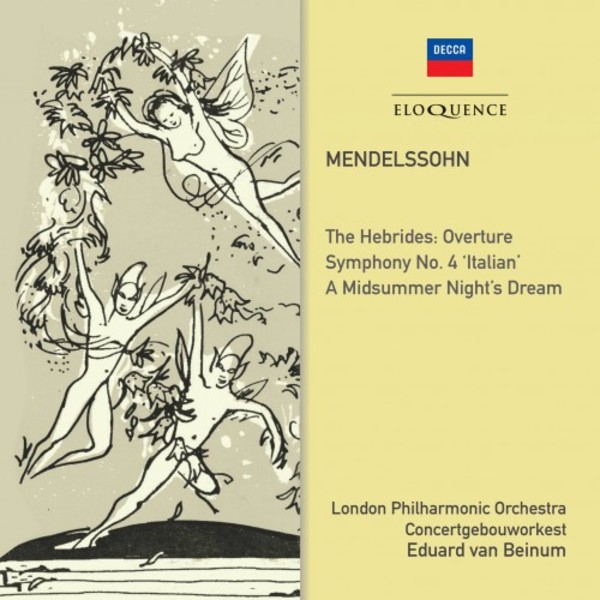 Classic 1950s accounts of Mendelssohn the teenage genius, the masterly orchestral tone-painter and the deft theatre composer, recorded by Decca and now reissued in new remasterings. With three of Mendelssohns most popular orchestral works, Eloquence continues its revival of the recorded legacy of Eduard van Beinum. Principal conductor of the Concertgebouw Orchestra from 1945 until his death in 1959, Van Beinum also led the London Philharmonic Orchestra for two seasons, starting in 1947.

This collection represents his work for the Decca label with both orchestras. The Hebrides Overture is an LPO recording from February 1949, praised in the press at the time for its refined palette of timbres in perhaps the composers finest evocation of nature-imagery, composed in 1830 from memories of his trip to Fingals Cave during his tour of Scotland the previous year.

Van Beinum recorded music from A Midsummer Nights Dream twice for Decca, and on both occasions with the Concertgebouw: first in 1946, when he omitted the Overture but included the Intermezzo, alongside the Scherzo and Nocturne, and again in 1952 (the recording heard here), this time including the Overture but omitting the Intermezzo.

The conductors last Mendelssohn recording was made in June 1955, also in Amsterdam: a painstakingly moulded account of the Italian Symphony in its familiar original version. As Raymond Tuttle remarks in the new booklet appreciation, van Beinum almost self-effacingly lets the musicians themselves shine, and allows us to admire Mendelssohns skilful handling of the orchestra.

The LPO is on good form here; Van Beinum is a conductor for whom I have a great respect; the recording [...] is admirably full.  Gramophone, December 1949 (Hebrides)

It has been claimed that van Beinum was too neutral and reserved a performer. Those who so view him would do well to listen to the [...] Mendelssohn performances in this set. Not only is there brio and dash aplenty, there is a daring that other conductors would do well to follow.  Fanfare, May-June 1979