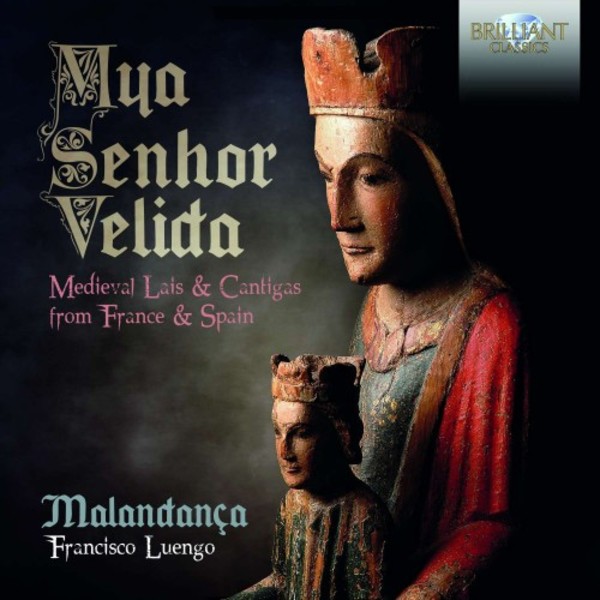 These medieval cantigas and lais  troubadour compositions from Galicia and France, respectively  display an innovation of the 12th and 13th centuries: themes of courtly love and Marian devotion combined, at once carnal and mystical, encompassing both the profane and the divine.

The two lais on this recording are found in a manuscript songbook known as the Noailles Chansonnier from c.1300. In the anonymous Plainte de la Vierge au pied de la croix the Virgin Mary speaks in first person in a figurative lament at the foot of the cross. The Lai de Notre Dame, attributed to 13th-century troubadour Ernoul Le Vieux or Le Vielle, begins with the authors promise to keep faith with the Virgin Mary and serve no other woman, a pledge quitereminiscent of those of Alfonso X of Castile in his Cantigas de Santa Maria, one of the largest collections of monophonic songs from the Middle Ages.

The Cantigas, attributed to King Alfonso X (12211284), were written in early-Medieval Galician-Portuguese, fashionable as a lyrical language in Castile at the time. In Santa Maria loei, e loo e loarei, the king thanks the Virgin Mary for her kindness and protection. Nenbressete, Madre de Deus deals with Marys role as mediator  in medieval eyes, her primary function. It was composed as a contrafactum on Recordare (an antiphon for the offertory sung in the Feast of Mary Mediatrix, also recorded here), translating the antiphon into Galician-Portuguese and expanding it with new musical and poetic concepts.

Virgen Madre groriosa, a contrafactum on the estampie Reis Glorios by French troubadour Giraut de Bornelh, binds this album together, demonstrating the relationship between the Galician-Portuguese and French lyrics.

To the members of Malandança, medieval music is a field in which both performance and scholarship are unavoidable and interdependent subjects. Research conducted by Francisco Luengo and others into sculptures depicting medieval instruments has opened up a world of sounds, ideas, images and voices from the distant Middle Ages.