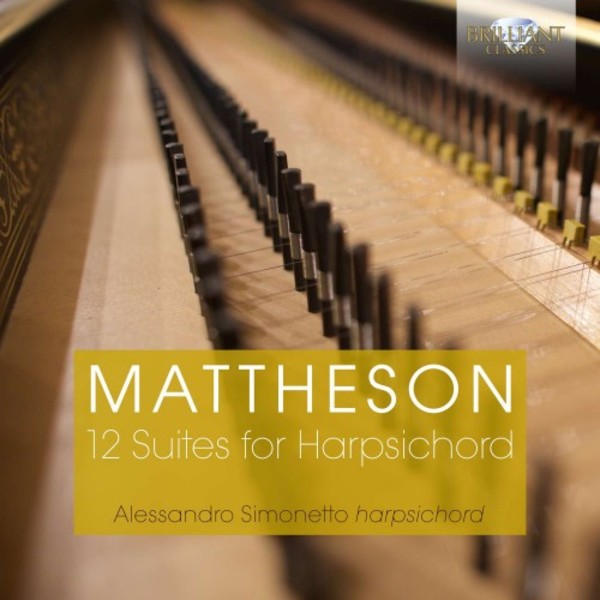 Better known now as a hugely influential theorist and codifier of the principles and performance practice of Baroque music, Johann Mattheson (1681-1764) was not just a scholar but a highly accomplished composer. This album of 12 harpsichord suites offers ample evidence of his creative gifts. The suites were published in two volumes in London in 1714. When Handel heard of this publication, he sent for a copy and in his own words, without hesitation, played it through: no mean compliment!

Doubtless Handel recognised a kindred spirit. Matthesons own style is genial and fluent, tending towards the more audience-pleasing character of Handels suites rather than the more rigorous keyboard music of Bach. These suites also have their light-hearted and humorous moments, qualities which characterise many of Telemanns instrumental works: indeed its notable how free Matthesons music is from the pedantic and academic character of at least some of his writing. Several suites open with a prelude of showy, toccata-like character before the standard Baroque sequence of dance movements such as vigorous and syncopated gigues and gentle sarabandes.

The last three suites are the grandest of the twelve, opening with spacious Overtures or in the case of No.10 a symphony, rejoicing in both counterpoint and a sense of high ceremony. Within the Twelfth are embedded adaptations of three pieces by Matthesons contemporary Georg Ludwig Böhm: a stylish example of the borrowing that was common practice at the time.

According to Musicweb International, Alessandro Simonettos previous Brilliant Classics album, of suites by Pieter Bustijn (BC94187), is a disc that no lover of Baroque or harpsichord music in general should be without: nearly 80 minutes of enormously appealing, high-octane invention superbly rendered by Alessandro Simonetto on a magnificent reproduction Ruckers instrument, brilliantly captured by the sound engineer - all that at Brilliant's bargain price!