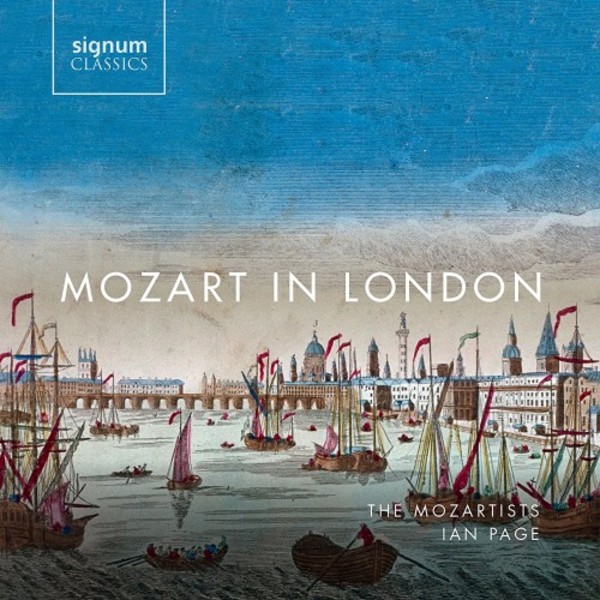 The Mozartists present an unprecedented survey of Mozarts childhood stay in London from 1764-65. The wide-ranging programme includes Mozarts remarkable first symphony (composed when he was eight years old), along with his two other London symphonies and his first concert aria. The repertoire also explores music that was being performed in London during Mozarts stay, including works by J.C. Bach, Thomas Arne, Abel, Pescetti, Perez, George Rush and William Bates, many of which have not previously been recorded.
The album features an outstanding line-up of soloists comprising sopranos Ana Maria Labin, Anna Devin, Rebecca Bottone, Martene Grimson and Eleanor Dennis, mezzo-soprano Helen Sherman, tenors Ben Johnson and Robert Murray and harpsichordist Steven Devine.
The album was recorded live during a weekend of performances at Londons Milton Court in February 2015 as part of the opening season of MOZART 250, and includes over a dozen world premiere recordings.

This double album is drawn from the copious amount of music recorded live across three days. There are excellent performances of some of the fledgling Mozarts London pieces interspersed among an abundance of rarely investigated repertory that was researched and edited especially for the occasion; over a dozen of the pieces receive their premiere commercial recordings. Moreover, Pages knack for choosing interesting singers yields contributions from eight highly capable soloists. ... Fingers crossed that The Mozartists will produce several more revelatory commemorations over the coming years until 2041.  David Vickers (Recording of the Month)
Gramophone July 2018