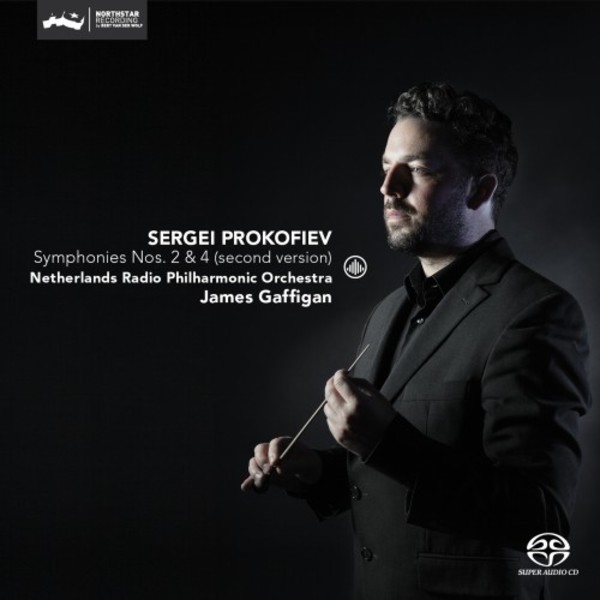 James Gaffigan, one of the most outstanding American conductors of today, released the fourth and last volume in his acclaimed complete survey of Prokofievs symphonies with the Netherlands Radio Philharmonic Orchestra. Together, they recorded Prokofiev's experimental Second Symphony and his revised Fourth Symphony.

Prokofiev's Second Symphony was composed eight years after his First, and is definitely more modern. When it was premiered, it was a fiasco; according to the composer, neither the audience nor the conductor understood anything about the work. The Symphony is not entirely modern though: it seems to be an ode to the modern era, witnessed by the layers of mechanically persistent rhythms, expressionist harmonies, ostensibly unfathomable forms and its very expansive take on tonality.

Prokofiev decided to revise his Fourth Symphony, op.47, after the successful premieres of his Fifth and Sixth Symphonies. The original four movements remained largely intact, but the changes say a great deal about his style at that point. Some passages were expanded or added, with a strong emphasis on melody: he introduced a new theme in the first movement, for example. He tried to align the scale more with what was required by Socialist Realism, in which the neo-classical is overlaid with a considerable dose of heroism and sometimes even bombast. The changes in the Fourth were so meaningful that Prokofiev gave a new opus number to the Second Version. The association of op.112 with Socialist Realism subsequently proved to be an obstacle to its acceptance in the West.

Despite their negative reception when they were premiered, both symphonies are widely recorded and performed nowadays. This recording is certainly worth a listen!

Gaffigan is internationally acclaimed for his conducting and the insight of his musicianship. He is Principal Guest Conductor of the Netherlands Radio Philharmonic Orchestra since 2011. Gaffigan is in high demand working with leading orchestras and opera houses world-wide.