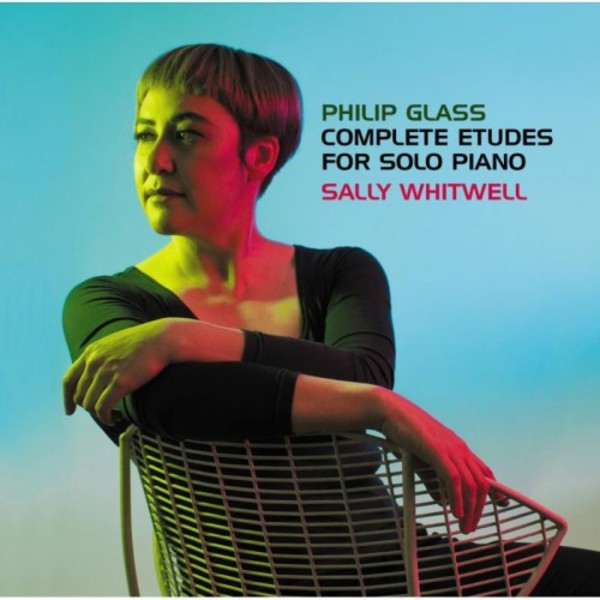 In 2011, Whitwell won the ARIA Award for Best Classical Album for her collection of Glasss music Mad Rush. Since then, her relationship with the composer has deepened, centring around the Etudes - his largest and most significant work for solo piano. After hearing Mad Rush, in 2013 Glass asked Whitwell to give the world-premiere of the Etudes, alongside the composer, at the Perth International Arts Festival; he subsequently invited her to perform them again in New York and Los Angeles. This album is a result of that close collaboration.

The Etudes - 20 in all, collected together into two Books - were written over the course of two decades between 1991 and 2012, and chart the musical development of one of the most significant composers of our generation. In the beginning of the series, we hear something much closer to the angry young man, rebelling against the academic musical establishment by writing and performing his signature repetitive structures that pull you into an unique meditative space (if you let them). By the end of the series we hear a much more peaceful, pragmatic human, Whitwell suggests. The music is deeply personal for Whitwell, too, who memorised every note of the ninety-minute set.

The album was recorded by Tonmeister Virginia Read, who won the ARIA Award for Best Engineer for her previous collaboration with Sally Whitwell.

It is [the] ability to step back and communicate the musics overarching sweep without losing sight of the details that marks out Whitwells recording from any number of recordings of Glasss piano music...For Whitwell its all about connection and communication, and Mad Rush manages that in abundance. - Gramophone Magazine

Glass has a persuasive advocate in Whitwell. Her playing is excellent throughout this disc, going beyond mere notational accuracy to breathe life and shape into the music. Whitwells rather personal interpretations bring expressive character and musical contrast to the works. Her playing is intense, highly charged and technically assured. - The Australian

Beautiful and sensitive ... through subtle artistry Whitwell sculpts a set of acoustic objects that are both refined and warmly human - Limelight Magazine

The Good, the Bad and the Awkward

Sally Whitwell - I Was Flying

Women of Note: A Century of Australian Composers