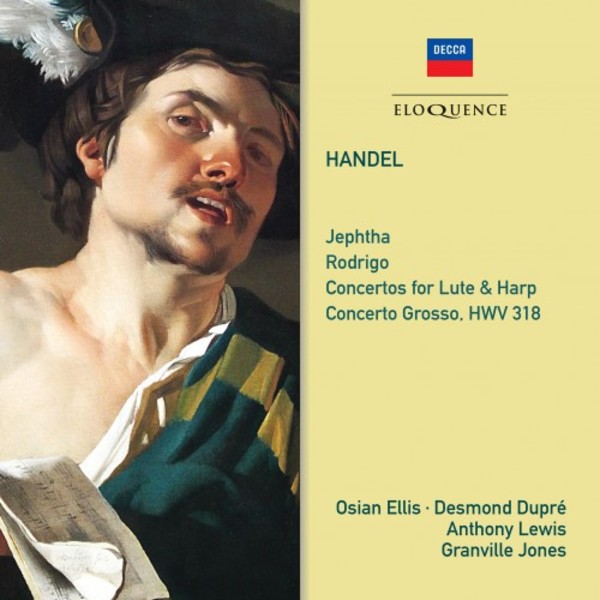 The works on this collection are drawn from two of the very first stereo LPs released by the LOiseau-Lyre sub-label of Decca. Music of Handel was a 1958 album containing arias (recently reissued by Eloquence on ELQ4824759) and this instrumental suite from Rodrigo, one of the composers early pre-London Italian operas, performed in Florence in 1707.

The music was compiled and edited by Philip Cranmer and Anthony Lewis, who as both scholar and conductor contributed much to the early success of LOiseau Lyre: also reissued by Eloquence is his ground-breaking recording of Purcells masque The Fairy Queen (ELQ4827449). As on the original LP, the suite is preceded by two sinfonias from Handels final oratorio, the majestic and tragic Jephtha: the juxtaposition serves to underline the strength and consistency of the composers voice over the course of almost half a century.

With the Handel orchestral works LP of two years later, the scholar and harpsichordist, Thurston Dart, along with his collaborator from the Jacobean Ensemble, Welsh violinist, Granville Jones, presented performances of two of Handels concertos from his Op.4 collection composed in 1735-36. The original intended solo instrument was possibly organ, but the concertos are performed here in arrangements made by Thurston Dart - another regular contributor to LOiseau Lyre in its early days - to exploit the virtuosity of the harpist Osian Ellis and lutenist Desmond Dupré.

Neville Marriner, collaborator with both Dart and Granville Jones in the Jacobean Ensemble, described Jones as: Wild and Welsh, the most gifted of my contemporaries, a manic-depressive who played like a god or a gypsy. Marriner features here not as director but violinist, his first occupation, as a ripieno soloist in the concerto grosso from the oratorio Alexanders Feast.

The piece that really gave me pleasure was the fine Concerto in C, in which the violin duetting of Carl Pini and Neville Marriner struck me as being very near the zenith of sonorous pulchritude ... I doubt whether it will ever be played better than on this disc. - Gramophone, March 1960

This is a delicate and airy performance [of Op.4 no.6] ... The Concerto grosso is performed with vivacity, and the sound throughout is fine. - High Fidelity, July 1961