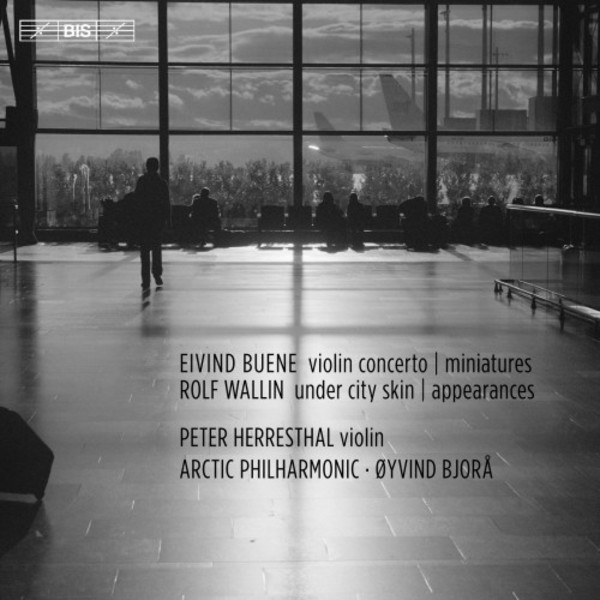 Following his 2001 disc of works by Arne Nordheim, Norwegian violinist Peter Herresthal and BIS have collaborated on the project A String of Releases  recordings of contemporary violin concertos, in several cases written especially for Herresthal. Featured composers so far have been Olav Anton Thommessen, Henrik Hellstenius and Ørjan Matre  all from Norway  as well as Thomas Adès and Per Nørgård. Utterly fearless in his approach to these complex works, Herresthal has received recognition for his recordings, earning a Spellemannprisen (the Norwegian Grammy) as well as being shortlisted for a Gramophone Award.

The present, amply-filled addition to Herresthals string features the composers Rolf Wallin (b. 1957) and Eivind Buene (b. 1973). Wallin  one of Scandinavias leading composers  has for Herresthal made a version of Under City Skin, his 2009 concerto for viola and ensemble. The work is a poetic and sonic journey through an imaginary cityscape, with the solo violin and the string orchestra playing off and with a pre-recorded soundtrack. Buenes Violin Concerto was also conceived with Herresthal in mind. With suggestive individual titles  Falling Angels, Sound Asleep and Among Voices  its three movements are each scored for a different combination of chamber orchestral forces. They can be played separately, but together they form a haunting triptych of melancholy and memory. Supporting Herresthal in the concertos are the conductor Øyvind Bjorå and musicians from the Arctic Philharmonic, in two different configurations: as a chamber orchestra and a sinfonietta. Bjorå and the Sinfonietta also perform Wallins Appearances and Buenes Miniatures, for 15 and 16 musicians respectively.