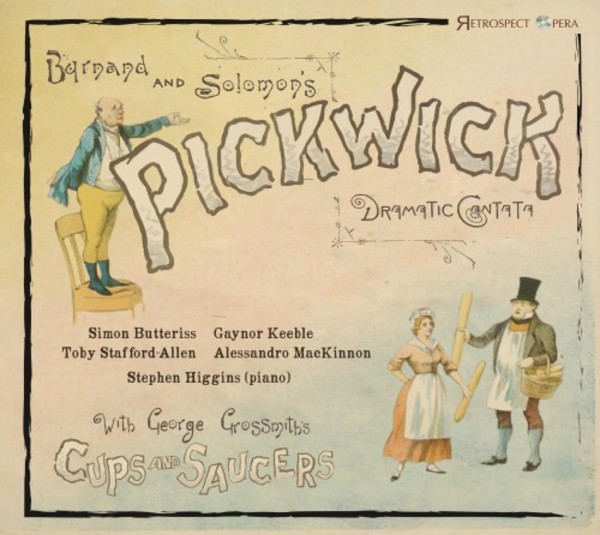 Following their extremely well received debut recording, Retrospect Opera are pleased to announce the release of their second disc, the first recording of F.C. Burnand (Sullivans collaborator for Cox & Box) and Edward Solomons Dickensian musical Pickwick, accompanied by the Victorian wit of George Grossmiths charming curtain-raiser Cups and Saucers. Retrospect Opera have assembled a stellar cast of artists especially sympathetic to the tone and era of the music, headed by Gilbert & Sullivan specialist Simon Butteriss, and directed from the piano by Stephen  Higgins.

Premiered at the Comedy Theatre, London, on 7 February 1889, it is no exaggeration to describe Pickwick as the first great Charles Dickens musical, though in its own day it was categorised as an operetta (and, for the scholarly minded, was officially titled a dramatic cantata, following the Gilbert and Sullivan Trial by Jury). Musical versions of Dickenss stories before Pickwick were little more than disjointed spoken plays with a handful of largely incidental songs. Pickwick, by contrast, was essentially conceived in sung music from start to finish, the most celebrated incident in Pickwick Papers, the hilarious misunderstanding between Mr Pickwick and Mrs Bardell, elaborated in a series of sparkling songs and duets.

The companion work, Cups and Saucers of 1876, was written, composed and performed by George Grossmith (1847-1912), best known for his origination of many of the Gilbert and Sullivan patter roles, but a talented composer and writer in his own right. It is a delicious little satire on the British obsession with Oriental china and may have helped inspire The Mikado.

Dibdin & Garrick - The Jubilee with Queen Mab and Datchet Maid