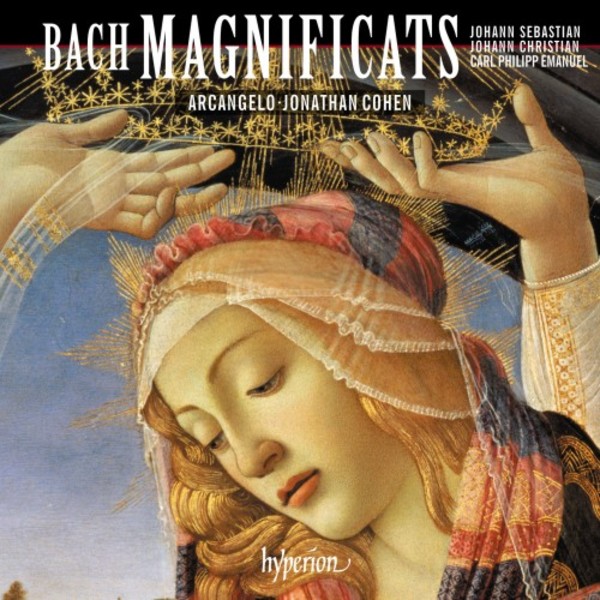 No fewer than three Bachs  father and two sons  and three wonderful versions of the Magnificat written over the course of the eighteenth century: one setting very familiar, the other two much less so.

If three settings of the Magnificat  Marys song of praise from the Gospel of Luke  on one disc seem like too much of a good thing, think again. One of the things the listener is left pondering after listening to this glorious new release from Jonathan Cohen and his Arcangelo ensemble is why no-one has tried this before. Alongside JS Bachs celebrated D major setting, Cohen presents us with versions by his two most celebrated sons, the quirkily brilliant Carl Philipp Emanuel and the suavely sophisticated Johann Christian (the London Bach), and the results are absolutely fascinating.

Unlike some recent recordings of Johann Sebastians work, Cohen opts for a chamber choir of three or four voices per part, and the combined forces make an impressive sound which is also ideal for his sons settings. With orchestral forces to match, voices and instruments are perfectly balanced (helped by a highly sympathetic and nicely focused recording), while the soloists ‒  unlike the squeaky-clean but sometimes anaemic voices often served up on rival accounts  are attractively characterful. So, in the JS Bach setting, we have Olivia Vermeulens rich-toned but buoyant mezzo on the soprano 2 line in Et exsultavit, contrasting with Joélle Harveys brighter but abundantly expressive soprano in Quia respexit, both of them blessed with maturity of insight. Iestyn Daviess countertenor, silky-voiced as ever, is complemented by a pair of responsive flutes in Esurientes, while tenor Thomas Walker is full-throated and ardent in Deposuit, but he and Davies form a perfect match in a sublime Et misericordia. Thomas Bauers splendid baritone makes an impressive but never overblown sound in Quia fecit mihi magna. Cohens pacing from one movement to the next is faultless (not something to be taken for granted on other recordings), pointing up the contrasts on which the work thrives while maintaining a sense of momentum that culminates in a thrilling Sicut erat in principio. Among many other highlights, the trumpet-emblazoned climax of Fecit potentiam has the hairs standing on the back of ones neck, and the performers clearly revel in the virtuosic brilliance of JS Bachs writing.

If the performance of Bach père is one of the most outstanding in recent years, the Johann Christian  his third setting, composed in 1760 for Milan cathedral, some three years after he had converted (to the dismay of his staunchly Lutheran family) to Roman Catholicism  is currently unique to the catalogue. Cast in an ultra-compact five movements, and lasting just 11 minutes, it is the very embodiment of Italianate grace, with crisply elegant vocal and instrumental lines, choral sections which anticipate early Haydn and Mozart mass settings and quasi-operatic solos. Cohens choice of soloists pays dividends, not least Thomas Bauer in the central Fecit potentiam. The movements themselves are multi-sectioned, with solo and choral passages frequently alternating to engaging effect, and Cohens musicians bring out the variety with unfailing tastefulness.

The setting by Johann Christians elder half-brother Carl Philipp Emanuel dates from 1738, and could hardly be more different. Cast in nine movements, at over 40 minutes it is the longest work on the disc, and abounds in those quirky musical tics that make CPEs style so instantly recognizable. There are several nods to his fathers setting, including some near quotes, but again Haydn and Mozart can be sensed on the horizon, particularly in the choral sections. As with JS Bach, the work bursts into life, with cascading violins and oboes, but most individual are the solo numbers: Thomas Walker shining in the virtuosic Quia fecit, Joélle Harvey and Olivia Vermeulen intertwining with flutes in Et misericordia, and Thomas Bauer positively operatic in an ear-catching, toe-tapping Fecit potentiam. Iestyn Davies returns for a meltingly pastoral Suscepit Israel, and it all builds to a tremendously joyous final fugue, horns rasping away alongside ceremonial trumpets and drums, and voices ringing out thrillingly. This is a performance to rival the award-winning account from the RIAS Kammerchor and Akademie für Alte Musik Berlin on Harmonia Mundi.

Even if you already have a favourite recording of the JS Bach, this one will knock your socks off with its combination of virtuosity, stylishness and commitment; the added attraction of the settings by Johann Christian and Carl Philipp Emanuel make it very special indeed. Whether for the individual pieces or the unique and endlessly absorbing coupling, this disc is a sure-fire winner, and a brilliant addition to Arcangelos growing discography on Hyperion.

Jonathan Cohen and Arcangelo snap into their festive sparklers with grand authority and lithe ebullience, sweeping effortlessly from verse to verse with considerable purpose. ... One is struck throughout by the exceptional balance of the voices and instruments yet without forgoing Cohens animated and imaginative way with text. ... Arcangelos voyage into the sons Magnificats is no less well paced or astutely textured. ... Carl Philipp Emanuels Magnificat is a substantial homage to his fathers setting (there are some obvious quotes), especially in the successful combining of so many contrasting elements.  Jonathan Freeman-Attwood
Gramophone February 2018

If you needed an aural demonstration of how the musical tectonic plates were shifting in the years spanning JS Bach's arrival in Leipzig and the emrgence of the young Mozart you would be hard pressed to find a more illuminating disc than this latest offering from Arcangelo. ... there's nothing over familiar aboit the captivating freshness and buoyancy that both chorus and instrumentalists bring to a much-loved warhorse.  Paul Riley (Choral & Song Choice)
BBC Music Magazine March 2018