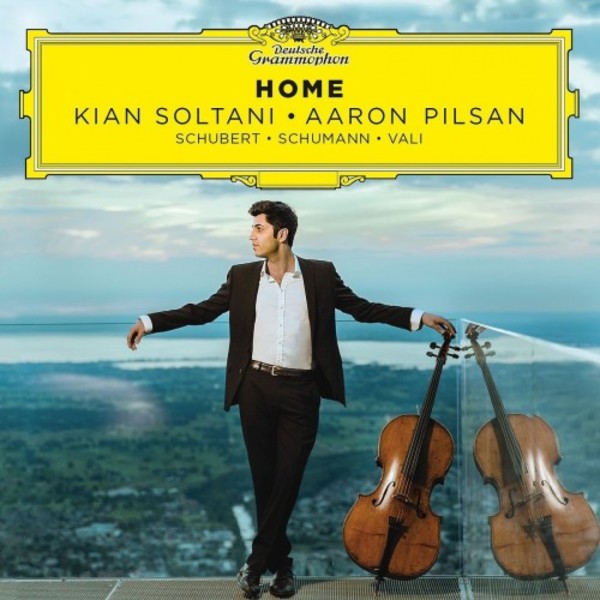 This is Kian Soltanis debut album on DG with duo partner Aaron Pilsan.

HOME: a concept album combining Kians Austrian and Persian roots, reflected in the choice of repertoire: cello highlights including one of the most famous Schubert pieces: the Arpeggione Sonata.

Being only 25, Kian already is one of the most thrilling cellists of his generation.

He attracted worldwide critical attention in the summer of 2015 when he appeared as soloist with Daniel Barenboim and the West-Eastern Divan Orchestra in performances at Berlins Waldbühne, the Salzburg and Lucerne festivals, the BBC Proms in London and the Teatro Colón in Buenos Aires.

Kian Soltani was born in Bregenz in 1992 to a family of Persian musicians. He began playing cello at an early age and was only twelve when he joined Ivan Monighettis class at the prestigious Basel Music Academy.

He is a protegée of Anne-Sophie Mutter and Daniel Barenboim and has been a member of Mutters Virtuosi as well as the West-Eastern-Divan-Orchestra. He also participates in the newly founded Boulez-Ensemble.

Soltani was born in Bregenz in 1992 into a musical Persian family and has all the qualities needed to win consistent critical acclaim, namely innate musicality, a yielding, svelte tone, an agile bowing arm and a skilful deployment of varied vibrato. Listening to him is a great pleasure. ... A beautiful programme, superbly recorded.  Rob Cowan
Gramophone April 2018