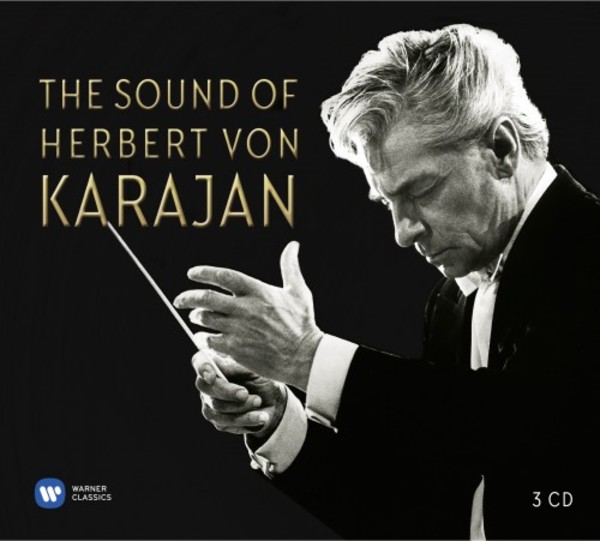 The Sound of Herbert von Karajan

Portrait of an iconic conductor: He was the worlds most popular podium idol  Herbert von Karajan, the mythical Maestro. And nearly three decades after his death he tops the pantheon of the classical music world with his legendary recordings. This 3-CD edition brings together great moments in his discography with which Karajan wrote recording history.

Herbert von Karajan is the epitome of the conductor. Who could fail to recognize his profile with its streamlined shock of hair? Even now, almost three decades since he died at the age of 81 in 1989, the charismatic figure remains an icon. His unparalleled career took wing on the momentum of early globalization: the success of the long-playing vinyl disc was the success of Herbert von Karajan. He cut some 800 records and was instrumental in spreading Western classical music to the uttermost parts of the earth.

How are we to explain the lasting fascination of the Karajan phenomenon? In musical terms, one factor is surely paramount: among the many elements that constitute an interpretation, Karajan quite clearly gave primacy to just one, namely the sound. For him, beauty and purity of tone were key. No extraneous noise was allowed to distract; there must be nothing to indicate how this ecstasy of sound came into existence. Karajans orchestral sound has an almost hypnotic effect. Few conductors are so clearly to be recognized on recordings as he is.

True, Karajan sometimes had ideas of his own about the composers tonal language, and that is one of the peculiarities of his enigmatic personality. Any student of his biography will be struck by its ambivalent features. Not once but twice, we are told, Karajan joined the Nazi party. It did no harm to his career in the Third Reich, and the highly talented young man rose swiftly from provincial theatres to the Berlin Staatsoper. After the end of the war, the Russian occupying forces banned him from conducting.

The constant question about the relationship between art and integrity was answered pragmatically by legendary producer Walter Legge for himself and the EMI record company: he wanted Karajan. So, shortly after the war, he travelled to bombed-out Vienna. A bottle of black-market whisky helped the pair lay the foundation stone of a collaboration that was to shape our appreciation of classical music up to the present day.

Karajans interests ranged far beyond the canon of German symphonic music. Brahms, Bruckner and Strauss were among his household gods, it is true, but so were Tchaikovsky, Sibelius and Grieg. He had a marvellous feeling for the luscious sound of Debussy and Ravel. And to Dvoráks Ninth, the New World Symphony, he brought a stringency and tragic inevitability that dismissed all sense of complacency and cockiness from this well-loved work.
 Verena Fischer-Zernin
These recordings have been taken from the Karajan OFFICIAL REMASTERED EDITION 2014