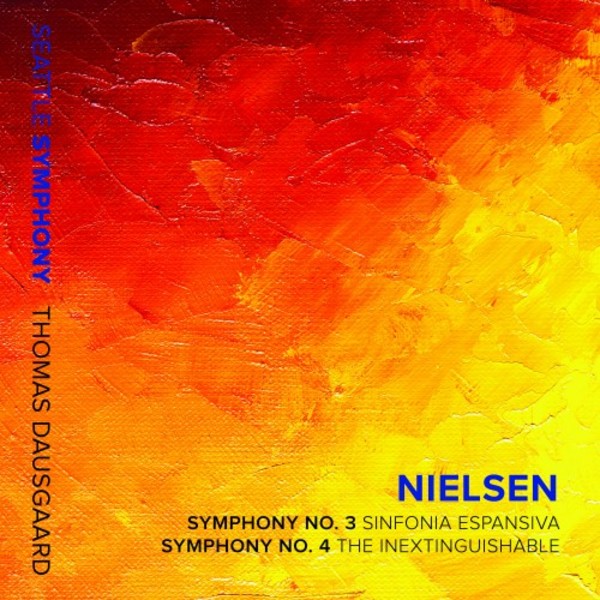 Symphony no.3, op.27 'Sinfonia espansiva'
Symphony no.4, op.29 'The Inextinguishable'

Symphony no.3, op.27 'Sinfonia espansiva'
Symphony no.4, op.29 'The Inextinguishable'

Following their recording of Mahlers Symphony No.10, which has been shortlisted for the 2017 Gramophone Awards and described as a game changer for all concerned, Thomas Dausgaard and the Seattle Symphony return with electric and superbly played performances of Nielsens two most famous symphonies. Dausgaard has championed the music of his countryman throughout his career  and this album marks the beginning of his long-awaited cycle of the great Danish composers human and majestic symphonies.

With naturalistic imaging, depth of field and dynamic range, all Seattle Symphony Media recordings have been engineered to audiophile standards and aim to capture as realistically as possible the sound of the orchestra performing on the Benaroya Hall stage.

Nielsens symphonies have received some exceptionally distinguished recordings from American orchestras over the years, from Martinon in Chicago and Bernstein in New York to Blomstedt in San Francisco. Now a new disc from the Seattle Symphony (on their own label) under their music director designate, Thomas Dausgaard, looks set to join this august band.

As with the award-winning recording of Mahler 10 from the same team (Europadiscs 2016 Disc of the Year), what impresses most in these live accounts of Nielsens Third and Fourth symphonies (Sinfonia espansiva and The Inextinguishable) is the sheer quality of the playing and recording. With a relatively close perspective, and strings to the fore (a conductors-ear view, if you will), every detail of these remarkable pieces leaps off the page, as if freshly minted. Theres an extraordinary depth of string tone, consistently characterful woodwind playing, and lustrous brass playing, while the well-defined timpani make just the right amount of impact.

The Eroica-like chords that set the Sinfonia espansiva in motion crackle with energy and, as the first movement progresses, rhythms are unfailingly alert, projecting the fundamentally generous spirit characteristic of the work as a whole. The pastoral second movement opens up gorgeous vistas of sound, and the vocalises from soprano Estelí Gomez and baritone John Taylor-Ward are marvellously evocative, if necessarily a little less distant than would be achievable under studio conditions.

The Allegretto third movement has a classical poise and vitality that hints at the influence of two more great third symphonies, Schumanns and Brahmss, while the performance is crowned with a splendidly warm-hearted performance of the noble, hymn-like finale, the horns and mid-register strings coming into their own. This is as persuasive a performance of the Sinfonia espansiva as theres ever been, in a work that Dausgaard clearly identifies with closely.

Recorded some 18 months earlier, in November 2015, the Fourth Symphony has a darker edge to it, inevitable in a work that was composed during the first years of the Great War, but the orchestra and Dausgaard throw themselves into the fray with tremendous abandon. Those who found the recent, widely-admired account from Sakari Oramo and the Royal Stockholm Philharmonic on BIS just a shade too cool will find this the perfect antidote, an ideal balance of emotional engagement and orchestral virtuosity, with a wide dynamic range to boot.

For Nielsen, the Fourth expressed the fundamental Life Force, the élan vital, in short the Inextinguishable that underpins all existence, and Dausgaard captures this underlying mood to perfection, through all the subtle gradations and layerings of light and shade. The fragile violin line that precedes the opening of the classical-hued second movement is one of many magical moments, the sparse yet ardent opening to the third movement and the energetic string cascades that herald the advent of the fourth being others. In the symphonys uninterrupted but clearly-structured span, Dausgaards mastery of transition is both peerless and priceless. The culmination in the battling sets of timpani is as thrilling as any youll hear on disc, the eventual achievement of glowing equilibrium tremendously uplifting, but the ultimate proof of this performance is the acutely observed, emotionally gripping account of the third movement, with its maelstrom of conflicting strands.

For this particular coupling, the Seattle Symphonys new disc goes straight to the top of the pile, both performances ranking with the very best. In demonstration quality sound, and with playing of tremendous commitment and musicality, it bodes exceptionally well for Dausgaards forthcoming Seattle tenure.