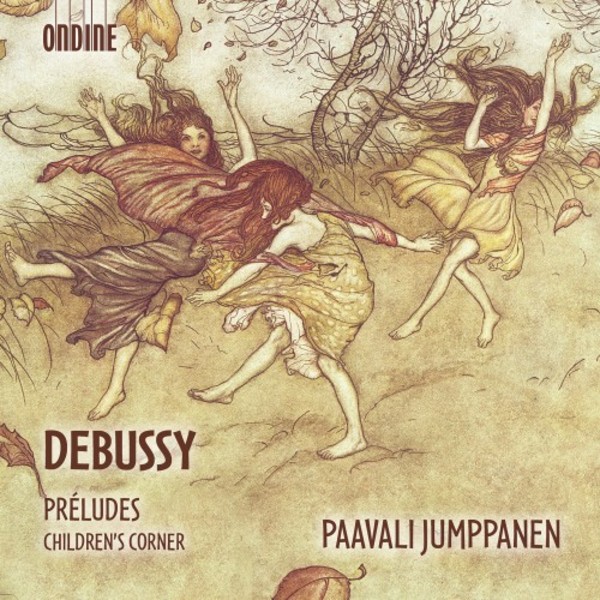 After the five-volume complete recording of Beethovens Piano Sonatas Paavali Jumppanens new recording on Ondine turns attention to Claude Debussys (18621918) piano works. This 2-CD set includes the complete Préludes together with the Childrens Corner.
Debussys oeuvre has been explored both by the amateur pianist and the most legendary virtuosos of the keyboard. Throughout his career Debussy sought new ways to express his musical vistas. He began numerous large compositional projects and between these big ventures wrote miniatures such as songs and piano pieces. Fine examples of these are the Préludes and the Childrens Corner.
Debussys 24 piano preludes were published in two sets in 1910 and 1913. These miniatures are varied in character and style, and include, among others, references to literature, poetry, nature, the Mediterranean landscape and the events in Paris during Debussys lifetime. This work resulted in the creation of such enigmatic pieces as La Cathédrale engloutie, La Fille aux cheveux de lin and Des Pas sur la neige, to name but a few.
The six pieces forming the cycle Childrens Corner (1908) evoke adult recollectionso of childhood. The set bears a dedication to Debussys daughter Chouchou and includes some of Debussys most well-known piano pieces, including The Snow is Dancing and Golliwoggs cake-walk.
A dedicated performer of French music, Paavali Jumppanen often performs the large cycles of Debussys late period, namely the Préludes and the Études. About a Debussy recital, The Boston Globe reported how Jumppanen maximized the pianos deeply resonant qualitiesnot just to create beautiful sound but to point up how radical Debussys harmonic language was. Another critic (ConcertoNet.com) noted: I was bowled over by Mr. Jumppanens performance. - - As for his upcoming recording of the complete Debussy Preludes, sight-unseen, I would urge any collector to grab it: if it is anything like the Etudes we heard last Sunday, we are in for a treat! New York Arts continued: Magnificent recital. - - I cannot imagine a more penetrating, subtle, and beautiful traversal of Debussys final statement for the piano.