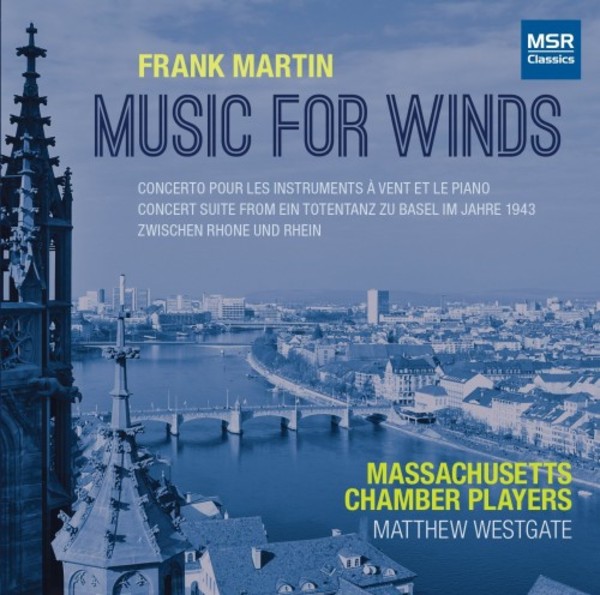 This is a game-changing MSR Classics disc in our appreciation of Swiss composer Frank Martin (1890-1974).  Never a part of any musical movement, Martin did his own thing, receiving acknowledgement from conductor Ernest Ansermet and Decca who recorded his orchestral music.

For their selection Matthew Westgate and his wonderful Massachusetts Chamber Players have found three extensive pieces for wind band.  These sound very much like the music Frederick Fennell recorded for Mercury. They are a real surprise.

Listeners should not be put off by so much death in Martin's Concert Suite, written during 1943, as it is similar in tone to his Concerto for Winds and Piano of 1924. The disc is rounded out with a swaggering march that Martin composed for the Swiss National Exhibition in 1939.

Hi-fi lovers will love this disc as it is recorded with great clarity, depth and huge dynamic range!

Conductor Matthew Westgate organized the Massachusetts Chamber Players in the fall of 2016 specifically for this recording project. The ensemble is comprised primarily of woodwind, brass and percussion faculty member musicians from the University of Massachusetts at Amherst and artist teachers from the Five-College Consortium of Western Massachusetts. Several UMass alumni and student musicians, western Massachusetts freelancer musicians and guest players rounded out the instrumentation. The Department of Music and Dance of UMass Amherst, the flagship campus of the UMass system, is one of the largest music programs in New England, providing more than 250 performance and concert opportunities each year across seventeen instrumental ensembles, six vocal groups and numerous solo and ensemble recital series. UMass music faculty members are noted leaders in the fields of performance, pedagogy and scholarship; they create a community at UMass that promotes individual growth through artistic and intellectual discovery.

Matthew Westgate is the Director of Wind Studies at the University of Massachusetts at Amherst, where he conducts the Wind Ensemble and Symphony Band and teaches graduate and undergraduate courses in conducting. Prior to his appointment at UMass, Westgate was the Director of Instrumental Activities at Xavier University in Cincinnati, where he conducted the Symphonic Winds, Chamber Orchestra and Pep Bands. Equally comfortable working with wind bands, orchestras and chamber ensembles, Westgate is in demand as a guest conductor, clinician, lecturer and adjudicator. In the summer months, he conducts the Wind Ensemble at Blue Lake Fine Arts Camp in Twin Lake, Michigan. In 2007, he was chosen as one of eight conductors to conduct the Eastman Wind Ensemble as part of the first Frederick Fennell Conducting Master Class, and in 2009 was billed as one of the West Point Bands Bernsteins of Tomorrow. He has also served as a conducting assistant in the Opera Theatre and Music Festival in Lucca, Italy. In 2013, Westgate was awarded Cincy Magazines Outstanding Educator award for his work as a teacher and conductor in Cincinnati, and in 2015 received the Residential First-Year Experience (RYFE) Student Choice Award for going above and beyond to support first-year students at UMass. His current research focuses strongly on the music of the Swiss composer, Frank Martin. Matthew completed his Doctor of Musical Arts Degree at the University of Cincinnati College-Conservatory of Music where he studied with Rodney Winther, and his Masters Degree in Conducting at Western Michigan University where he studied with Robert Spradling.