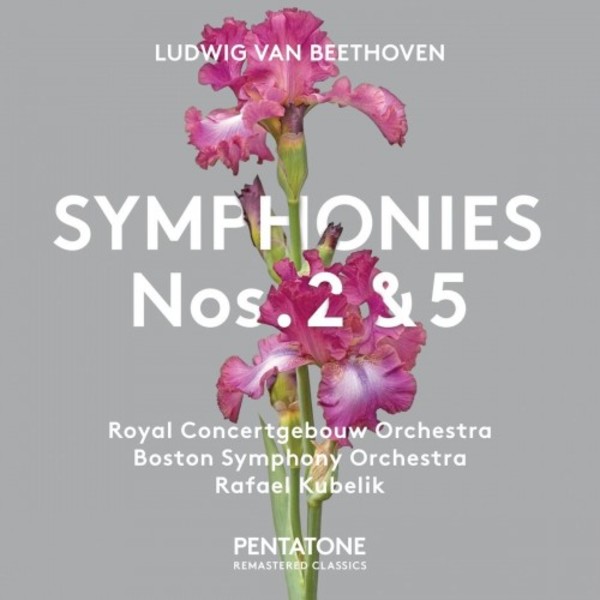 Dating from the 1970s, Rafael Kubelik's incisive and acclaimed reading of Beethoven's Second and Fifth Symphonies is the latest release in the Remastered Classics series from PENTATONE, performed with panache by the Royal Concertgebouw Orchestra and the Boston Symphony Orchestra.

For a work that was written during an unhappy period of his life, Beethoven's second symphony nevertheless bristles with infectious humour and vitality. Its striking innovations startled contemporary audiences, from the imposing opening to the capricious scherzo and the witty, energetic finale, but Beethoven's indebtedness to the classical symphonies of Haydn and Mozart are still quite apparent.

Goethe described Beethoven's turbulent fifth symphony as "very great, quite wild; it makes one fear that the house might fall down." Its visceral energy is announced right from the start with its famous opening notes whose hammer blows drive the development of the symphony - from the dark, brooding drama of the opening movement to the spectacular and radiant outburst in the triumphant final movement. It's one of Beethoven's most riveting and compelling works and one of his deservedly most popular.

These recordings form part of the acclaimed cycle of Beethoven symphonies Rafael Kubelik made for Deutsche Grammophon in the 1970s, each symphony performed by a different orchestra. Although recorded in multi-channel sound, these winning performances have previously been available only in the conventional two-channel stereo format. Using state of the art technology which avoids the need for re-mixing, PENTATONE's engineers have remastered the original studio tapes to bring the performances to life as originally intended: in compelling and pristine multi-channel sound.