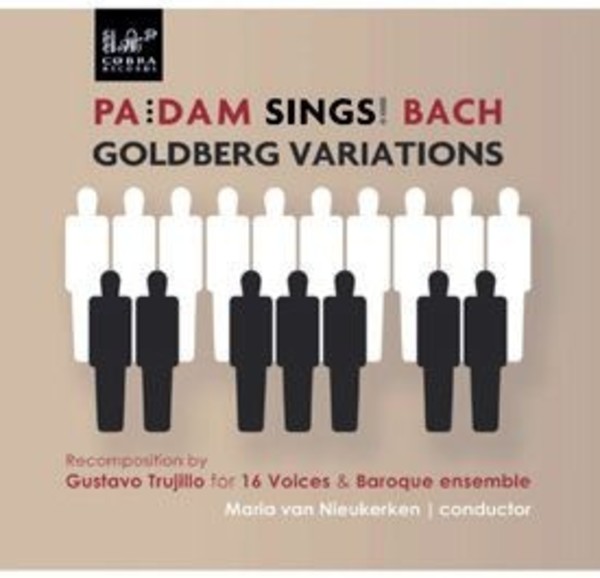 Since the beginning of the 19th century there have been numerous adaptations and arrangements of the Goldberg Variations. The work was obviously composed for a keyboard instrument, but the contrapuntal style of writing makes it very appealing for performance with other instrumental ensembles; imitations and canons form the core of the keyboard practice.

The variations are predominantly three- or four-voice, with a clear harmonic progression and a melodic range appropriate for most instruments. The Goldberg Variations is full of fine melodies, canons and fugues. Some of the variations were originally from songs, such as the Aria and the Quodlibet; other variations almost beg to be sung.

That is why the idea was born to rewrite the Goldberg Variations for 16 voices. It was challenging to produce an arrangement which sounds like authentic Bach vocal music; not sung keyboard music, but an idiomatic management of the choir, using vocal lines and singable melodies with text for articulation and phrasing. Not a literal arrangement, but a re-composition of the Goldberg Variations.

In Gustavo Trujillos re-composition the choir is combined with a small baroque ensemble consisting of a string quartet and three woodwinds who play variously recorder, oboe, oboe damore and bassoon. The voices and instruments are closely intertwined, and take over from and support each other. Each variation is played by a different combination with a different texture and tone colour; voices and instruments alternate in a principal or supporting role.

The chamber choir PAdam is a contemporary ensemble consisting of versatile, ambitious and independent professionals, under the energetic leadership of conductor Maria van Nieukerken. PAdam distinguishes itself by its entrepreneurial attitude, eclectic programming and original approach. A good example of this is the theatrical production and CD based on the vocal version of Bachs Goldberg Variations.