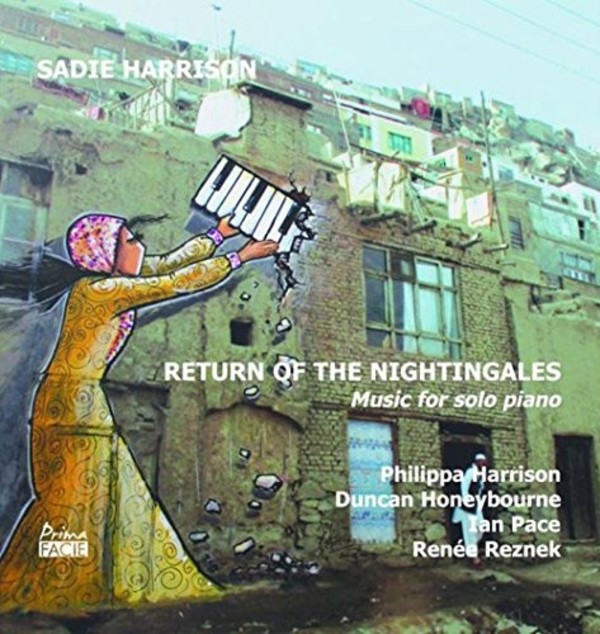 Sadie Harrison - Return of the Nightingales: Music for Solo Piano

Sadie Harrisons new album Return of the Nightingales features eight solo piano works composed between 2013-2017. The album is a celebration of four pianists with whom Sadie has collaborated extensively over the past decade - Philippa Harrison, Duncan Honeybourne, Ian Pace and Renée Reznek.

The majority of the pieces were premiered by these pianists and the disc is a showcase not just of Sadies music but also of each individual performer - from the hyper-virtuosity of Ian Pace in the title work to the quirky vivacity of Philippa Harrison in Four Jazz Portraits, from Renée Rezneks highly coloured interpretation of Par-feshani-ye Eshq to Duncan Honeybournes sumptuously expressive renditions of Shadows and Lunae.

As such, the disc offers a unique insight into a range of contemporary piano performances, an unusual contribution where the emphasis is as much on the players as the composer herself.

Sadies piano works are performed and broadcast all over the world and are part of the core repertoire of many international pianists. Her music is joyfully multi-referential acknowledging Bartók, Berg, Chopin, Debussy and jazz greats such as Evans, Waller and Monk. Sadies passion for the cultures of Persia and Afghanistan has also found expression in pieces which weave traditional folk music into starkly modernist pieces, finding news means to celebrate the diversity of musical languages across continents and centuries.

The range of references in these works - boogie-woogie to 1920s Hollywood film scores, machine-gun rattle to British folksongs, Methodist hymns to an Afghan singers chant - are threaded together by birdsong which features in almost every work on the disc, an eternal music around which the pieces revolve.